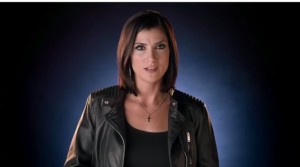 Gosh, Dana Loesch is really outraged by doctored videos, isn’t she? Well, no, actually. The right-wing radio mouthpiece didn’t seem to have a problem with the doctored videos targeting Planned Parenthood — she even praised their supposedly revelatory nature. But when someone released a doctored video that featured her, she went apeshit.

Granted, it was a different ball of wax altogether; the Planned Parenthood videos were presented as being accurate, whereas the cartoonish video of her  apparently shooting herself was an obvious satirical riff on her (rather deranged) pimping video for the NRA — a playful but blunt reminder of what happens when people play with guns.

Now you could always call this video unfunny and in questionable taste if you like (I might tend to agree on at least the latter point). But Loesch wasn’t satisfied with that. She tabbed it as a threat to her life, and a typical gesture by gun-grabbing librulz; she even contacted the FBI. See if you can follow the logic here: Them librulz hate her because they hate guns and she loves guns. So they want to kill her using some of those guns they hate. One of the big problems with firearms is you don’t have to be particularly bright to own one.

She even thought it pertinent to point out that she’s a mother, which didn’t seem to stop her from hawking a product that kills thousands of children every year; yet her own children apparently are supposed to be an impenetrable shield against anyone illustrating the very real consequences of her actions.

Loesch posted the clip online, and her fan base took the bait, denouncing it as “sick”, “disgusting”, “hateful”, and entirely typical of them librulz. (And by the way, it wasn’t nearly as “grisly” or “graphic” as they all proclaim, but only implies the gunster shooting herself in the head, by a splatter of obviously fake blood.) None of them have seemed particularly outraged about her own sick, disgusting and hateful allegation that Planned Parenthood is “selling black market baby parts”.  And few if any of them have shown any outrage over reports that Trayvon Martin’s killer boastingly posted a photo of his trophy kill. But if you dare impugn The Almighty Gun, all hell breaks loose. As one commentator so succinctly put it:

People tweet gun related violence threats against government and President Obama on a daily basis, but nobody on the right cares. One spoof video and everybody loses their minds.

Let’s emphasize that whatever you may think of the video, it was the work of one person. It did not represent the “gun control” movement or any other group. Yet Loesch and her drones did their best to dishonestly link it to Moms Demand Action. And they proclaimed in loud and unanimous chorus that it was a tactic typical of gun-grabbers and librulz in general. (This is an example of conflating a small number with a large number, as discussed in a previous post.)

In short, this episode serves to illustrate a sobering and inescapable fact: the rabidly delusional, toxically polarized, shoot-first-and-ask-questions-never mentality pervading the gun culture is what makes gun ownership in America such a problematic and deadly proposition.