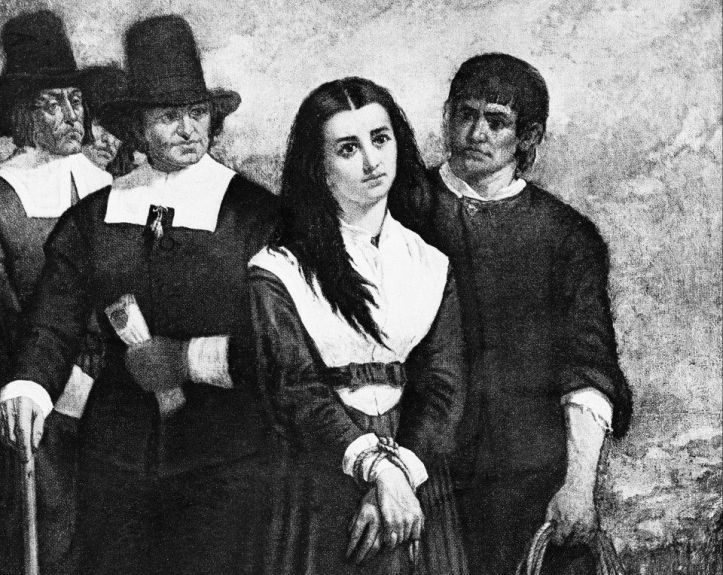 October is a delightful month: with its crisp weather, fall foliage, ripened fruit, the World Series, and of course Christmas decorations everywhere as part of the ubiquitous War On Christmas. But lest we forget, there is another holiday that used to take precedence in October. No, besides Columbus Day.  And while it’s fun to attend “haunted attractions” and see all the black and orange, and the trick-or-treaters in costume, we mustn’t lose sight of the very grim history behind those caricatures of pointy-hatted witches. Accusations of “devil worship” have cost many people their lives in horrible ways in the past; and they have even been leveled against innocent individuals in our own supposedly more enlightened age.

The kind of misinformation that led to those horrors persists today. And there are even widespread misconceptions about the history of the whole bloody mess of accusing and trying “witches”. So while we’re waiting for a more substantial blog post to pop out of the oven, let’s briefly look at some of the most common misconceptions about witch trials:

1. Millions of people were tried as witches in Europe

As you may be aware, hyperbole is often involved when people look back on sensationalist events and trends of the past. The number of gunfights in the American West, for instance, has been greatly exaggerated — after all, they make good cinema and pulp fiction. And though the Crusades were undeniably bloody, the tally of victims has greatly expanded in the retelling. The same is true of witch trials. Historians estimate the actual number of persons executed as witches in Europe to be somewhere between 40,000 and 100,000.  (The actual number of documented executions for witchcraft is about 12,000). Some estimates run as high as 200,000. Those are certainly horrifying numbers, but a far cry from “millions”.

2. Witch trials were very common in the Middle Ages

They were actually quite rare. While the “Dark Ages” (which weren’t quite as dark as many people suppose — but that’s another discussion) were notoriously brutal toward (suspected) offenders of all stripes, alleged witches were generally not among them. The “golden age” of witch trials didn’t really begin until the Fifteenth Century (about the time of Joan of Arc), which was well past the generally agreed upon imaginary demarcation point between Medieval and Renaissance. The last known witch trial in Europe was in Poland in 1783. In America, the last known trial was 1833 in Tennessee.

During the Middle Ages, however, people certainly were tortured and horrifically executed for the offense of “heresy”, which might be thought of as witchcraft in another robe — both involve doing/ believing/ thinking things that conflict with official religious doctrine. Indeed, Pope John XII officially decreed that the two go hand in hand — that witchcraft, in effect, is a form of heresy. That was not until the early Fourteenth Century, which was at the tail end of the Medieval era, but still it is likely because of this identification between heresy and witchcraft that many people today have such a grim and distorted view of persecution for “witchcraft” in the Middle Ages.

3. The church was behind it

Not necessarily. It’s complicated. During the Middle Ages, church authorities tended to look upon witchcraft as superstitious nonsense. In fact, in the year 906 the church actually declared it heresy to believe in witchcraft. It did a total about face in 1484, however, when Pope Innocent VIII decreed it heretical not to believe in witches.

What religion has always done, however, is provide the ideological framework within which such persecution took place. Fundamentalist zealots can point to several biblical passages that condemn witches (e.g. Deuteronomy 18: 11-12) and apparently even call for their murder. (Exodus 22: 18 : “Do not allow a sorceress to live.”)

4. Burning people at the stake meant setting them on fire

Usually nothing so merciful as that, alas. What would happen quite often is that the victim would be tied to a stake within a ring of fire and slowly roasted alive. The lucky ones might die of smoke inhalation. Incidentally, even individuals who were already dead could be “executed” by burning. The body of John Wycliffe was exhumed and burned 30 years after his death.

5. Suspected witches were burned at the stake in America

Never happened. The preferred method of execution on this side of the pond was by hanging. In Salem, 19 people were hanged and one was pressed to death with stones.

The myths and lore surrounding historical events like witch trials are a boon to the imagination, and to galvanizing emotional response to certain ideals. They are a convenient shorthand for the collective memory; we speak of “Salem witch trials”, even though trials also took place in Andover and Ipswich, and in fact the whole witch mania actually got started in Salem Village, which is now called Danvers. Referring to all of them as just “Salem witch trials” is all well and good in pop culture — just as it’s fun to read Longfellow’s poem about Paul Revere even though it’s mostly bullshit, and Revere is mostly just famous because his name rhymes with so many words. But when it comes to having a serious discussion about history, there’s no substitute for getting the facts straight.