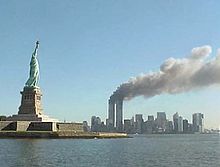 “We did not have a terrorist attack on our country during President Bush’s term.” — Dana Perino, Fox “News”

(Bolling later explained that he meant post 9-11. He was still ignoring a number of attacks, including three that the Bush administration itself labeled as terrorist.)

“Obama often complains about the problems he inherited from George W. Bush, but he also inherited a record of zero successful attacks on America after 9/11.”  — Michael Goodwin, NY Post

“The Bush administration had seven years after 9-11, no successful attacks in the United States.”  –Charles Krauthammer, Washington Post (speaking on Fox “News”)

“We had no domestic attacks under Bush. We’ve had one under Obama.” — Rudy Giuliani (yes, THAT Rudy Giuliani)

(NOTE: The one “attack” under Obama was actually a FOILED plot – which under a Democratic president counts as a failure rather than a success. During the Bush administration, on the other hand, there was the foiled “shoe bomber” plot, which counts as a resounding triumph for him, and therefore is not included in the attack tally by Giuliani or the others.)