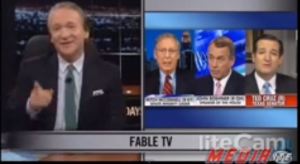 Bill Maher was in fine form, as he often is, on July 11 when he applied the much needed term “zombie lie”  for a lie that keeps coming back and making the rounds even after it has been thoroughly killed. He is referring specifically to GOP lies about the ACA (or, as it will be forever branded, “Obamacare”), but he quotes other notable examples. And makes some pertinent observations:

Look, I get it. Neither party has a monopoly on lying. And in fact they all do it so often they invented their own word for it. “I misspoke”. .. But how come the rule for one party, the Republican Party, is that when they get caught in a lie, they don’t have to stop telling it?

It’s a question worth asking. And a video worth watching.