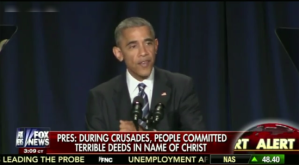 They called it a shameful statement, an embarrassment, an act of self-destruction on the part of President Obama, a defense of terrorism,  and an out-and-out attack on Christianity. They said that he was equating terrorism with Christianity, a “moral equivalency” that was “stupid and dumb” (both??). They called it “moral stupidity” (at least it wasn’t immoral stupidity). They said the president was displaying his own closet Muslim faith, and his hatred of America itself. They even touted it as proof that “liberals” in general (of which they’re immovably convinced Obama is one) love terrorists and hate America. What horrific utterance did the president commit in order to earn this (self) righteous condemnation? It was a little statement he made at the National Prayer Breakfast:

Humanity has been grappling with these questions throughout human history. And lest we get on our high horse and think this is unique to some other place, remember that during the Crusades and the Inquisition, people committed terrible deeds in the name of Christ…. So this is not unique to one group or one religion. There is a tendency in us, a sinful tendency that can pervert and distort our faith.

The National Prayer Breakfast is an event sponsored by the ultra-right wing fundamentalist group known by the appropriately godfatherish name The Family. As usual, the president displayed chutzpah in venturing onto hostile turf and offering an olive branch. And as usual, he was eloquent and insightful. In fact, the more rational observers hailed his address as “brilliant”, “remarkable”, and “a powerful celebration of America’s religious tradition.” Naturally, then, the right-wing fanatics went absolutely apeshit, spewing out an avalanche of straw men, dopey insinuations, references to nutty rumors, and downright lies:

The president’s comments this morning at the prayer breakfast are the most offensive I’ve ever heard a president make in my lifetime. He has offended every believing Christian in the United States. This goes further to the point that Mr. Obama does not believe in America or the values we all share. (Former VA Governor Jim Gilmore)

We all share the values that slavery and slaughter are desirable if done by the right people?

Guess I missed it. When exactly did he “blame the Crusades”?

“Nominal Christian”? Cute. Would you say the same about the pope? It was a pope who spearheaded the Crusades. How much more “true” does it need to be? 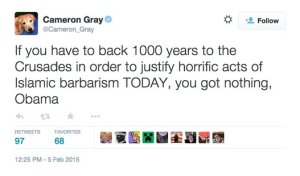 Guess I missed it. When exactly did he try to justify horrific acts of barbarism, Islamic or otherwise?  But somebody else missed the fact that he did NOT have to go back 1000 years.

Guess I missed it. When exactly did he insult Christians? And why would he do that when he is at least a “nominal Christian” himself?

So Barack Obama, leftwing community organizer and closet theologian, used the National Prayer Breakfast to throw a tu quoque at anyone critical of Islam while continuing to fancy himself as the Pope of Islam (Conservative News)

Gotta admit that “tu quoque” is a level of diction several notches above the Palinesque, but unfortunately we can’t say the same for the content.

Mr. President, you… are damning your reputation as a president and may never hold any regard or esteem of the American people. Then again, perhaps that was always your aim, as you fundamentally transform our beloved Constitutional Republic. (Allen West)

The ever-reliable Mr. West, who presumes to give the “Islamapologist In Chief” a history lesson, also claims that lynchings in America were supported by “Democrat (sic) Christians”.

One evil man had the audacity to attack Christianity and defend Islam in the midst of 3,500 Christians at the recent National Prayer Breakfast… Barack Obama and others like him have a direct connection to evil; whereas too often people serving God are not directly connected to truth. This is why Obama can lie and push his destructive agenda and mercilessly attack our freedoms and sacred institutions. (CNS)

This latter, hilariously enough, appears in a piece titled “Christians, It’s Time to  Get Over Your Illusions”.

In the midst of all this sound and fury and manufactured outrage, one little fact was a bit neglected: the president’s observations were absolutely on the mark. Horrific deeds have indeed been committed in the name of Christianity, and just about every other religion that ever has existed. He was right about slavery. He was right about Jim Crow. He was right about the Inquisition. And yes, despite the current tide of trendy historical revisionism, he was even right about the Crusades.

But these episodes are only a sampling of the violence that has been performed in the name of Christianity. We touched upon this in a recent discussion (“The Christian Persecution Complex, and the Myth of the School Prayer Ban”), though it really was just scratching the surface. During the interval of time between Christianity’s coming to power in the Fourth Century, and up to the modern age, there has been an average of one major episode of Christian barbarism every 15 to 20 years. And these are just the major episodes, most of which were massive campaigns that claimed the lives of many victims.

One of these was a campaign by England to “civilize” non-Christians in Ireland by slaughtering tens of thousands of them. One of the commanders of the forces, Humphrey Gilbert, ordered that

the heads of all those (of what sort soever they were) which were killed in the day, should be cut off from their bodies… and should be laid on the ground by each side of the way … (to cause) great terror to the people when they saw the heads of their dead fathers, brothers, children, kinsfolk, and friends on the ground.

And if you’re a fan of Fox “News”, you might have been under the impression that ISIS invented beheading.

As for the beloved Crusades, one (Christian) chronicler of the noble exploits recorded that during one particular siege the noble Crusaders

How very Christian of them to be such gentlemen. Makes you wonder what kind of harm they’d been doing to other females they’d encountered.

You might object that some of these episodes were not of a particularly religious nature, or that there were sometimes other motives in addition to religious ones. True, but the point is that these horrible deeds were committed by Christians. Or at least nominal Christians. Furthermore Christian beliefs were often cited as the justification for atrocities, even when they actually may have been committed for other reasons. The very fact that dogma can be considered a justification for savagery is itself a damning indictment of a social order dominated by religious fanaticism.

I’ve always been fond of Philip Roth’s short story Defender of the Faith, in which a Jewish army sergeant decides to crack down on one of his fellow Jewish soldiers because he realizes that defending his religion entails defending it not only from the outside but from the inside. That’s a lesson that many Christians don’t want to learn; but President Obama seems to understand perfectly. If you’re a Christian, perhaps you should ask yourself which sentiment you’d rather have expressing your religious values to the world: (a) “I’m appalled by the things some Christians have done, and I pledge to do better’; or (b) “Atrocities? You’re talking about history. You obviously hate Christianity and hate America.”

In writing for Time about the Bizarro Planet reaction to the the president’s speech, Eric Yoffie notes

One would think that both religious and political conservatives would have applauded the President’s remarks, which celebrated American religion and affirmed the centrality of religion in American society.

And he goes on to ask why such “self-evident” truths should be considered the least bit controversial. He chalks it up to Christian “denial”, and that probably is indeed one factor. But the reaction was probably at least as much political as religious. In other words, it was yet another manifestation of Obama Derangement Syndrome, the obsession with trying to make a scandal out of absolutely anything and everything the current president says or does.

It’s certainly not unheard of for presidents to spark controversy when they’re caught telling lies. But Barack Obama very well might be the first politician in history to possess the uncanny power to generate controversy and cause reactionary heads to explode just by telling the self-evident truth.