In the previous installment, we considered what we have termed The Comparison Gambit, which entails making inappropriate comparisons between the crime and gun statistics of two very different places. In particular, we examined the popular comparison between Chicago (a higher crime city in a state with strict gun laws) and Houston (a supposedly lower crime city in a state with loose gun laws) and explained why the comparison doesn’t work.

It may have occurred to you that these comparisons are not limited to cities. You’ll also see them made between states and entire countries. Here, for example, is another gun meme making the rounds:

What’s wrong with this picture? Several things. First, it doesn’t even get its facts straight. Switzerland, though it has one of the lowest homicide rates in the world, does not have the lowest — some countries (e.g. Japan, Singapore and Iceland) with stricter gun laws have less crime. Furthermore, Switzerland does not “require” citizens to own firearms. Nor does Honduras prohibit them.

But perhaps more important, it’s absurd to assume that because these two nations have a comparable population, they are comparable in other ways as well. In the words of Politifact:

There’s really no point in comparing the challenges of Honduras, a lower middle-income country in Central America beleaguered by corruption and violence from the drug trade and gangs, to Switzerland, an affluent country nestled in western Europe…

The post ignores a litany of cultural, political and socioeconomic factors that play into gun violence, or a lack thereof. The gross domestic product per capita, to name one, is $2,435 in Honduras and $84,733 in Switzerland, according to the World Bank.

Additionally, it’s an unwarranted assumption that just because a particular country has a high rate of gun ownership, it must have a low rate of gun regulation. One reason there are so many armed Swiss is that men are required to serve in the military. The government issues them guns when they enter the service, and takes them back when they muster out. And in the meantime, those guns are strictly regulated, as are civilian firearms. Switzerland, in short, has stricter gun laws than the U.S. (Who doesn’t?) And in case you don’t know, the U.S. has a hell of a lot of gun violence compared to most other affluent nations. 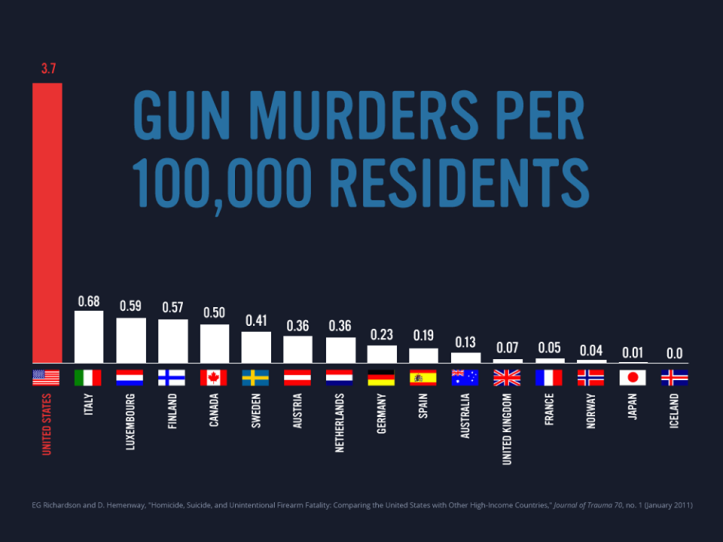 Two other countries the gun culture has zeroed in on are countries with rather strict gun laws: England and Australia. A viral Facebook post that purports to have been written by an Australian police officer claims that since new firearm regulations were enacted in 1996 following the Port Arthur massacre, crime down under has been escalating. But the figures given are false and misleading; actual crime figures from Australia give a very different picture.

The same kind of narrative applies to England and Wales. It has become an article of faith among the Second Amendment cult that since England adopted stricter gun laws 20 years ago, it has become a much more violent and crime-infested country. In reality, crime in England has been declining rather steadily since about that time. The discrepancy in statistics occurs because the gun culture is relying on figures compiled by British law enforcement authorities; but those figures have been notoriously and horrendously unreliable.

A list of the 30 U.S. cities with the highest murder rates includes at last 12 in states with loose gun laws, and at least 5 more in close proximity to such states. It’s hard to draw a solid conclusion from that. Somewhat more definitive, but still not conclusive, is the fact that states with the strictest gun laws have the fewest gun-related deaths. 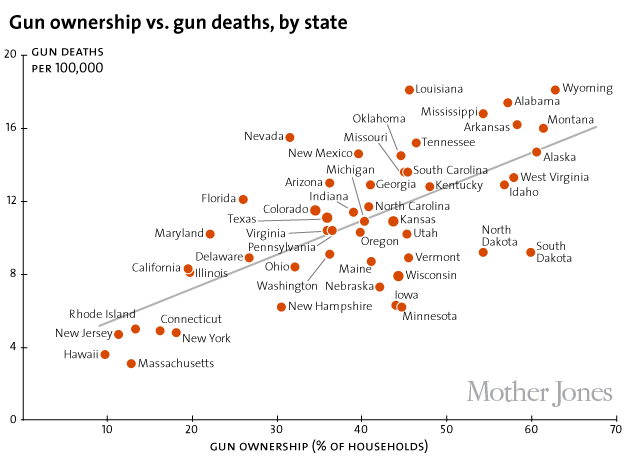 Nearly two-thirds of these deaths are suicides, and so the gun culture cries foul when they are included in the tally of gun deaths, as if suicides are less dead or less violent than homicides. The thing is, even if we did exclude them, the U.S. would still considerably outstrip most other countries in the world in gun deaths.

Speaking of suicide, and speaking of England, the suicide trend in that country provides an illuminating counterpoint to a common gun culture talking point: the idea that if people didn’t have an easy availability of guns, they’d kill just as much via other means, so you may as well make it easy for them by giving them ready access to the real deal.

But in England, it was once trendy (as it has been in many places) for the suicidally inclined to do their deed by sticking their heads into ovens. Because it was a very effective means of doing yourself in back when ovens were heated with coal gas, which produced a high level of carbon monoxide. Then in the Seventies, the nation finished switching over to natural gas, which is much cleaner. Subsequently, there were no more suicides by gas, and the total suicide count fell by one third.

Now it’s possible that certain motivations for suicide disappeared at the same time as old-fashioned ovens. But it’s more likely that, deprived of a handy and effective means of self-destruction, suicidal individuals delayed their big step indefinitely and ultimately changed their minds altogether. By the same token, it’s probable that those who are inclined to commit murder would be less likely to do so if they had to do it with a lawn chair rather than an Uzi.

But again, we can’t really “prove” that with hard statistics. In fact, it’s very difficult to draw positive causal conclusions about the relationship between guns and crime in general. But if we’re going to make any conclusions about probability, we should do so with the largest possible database rather than with cherry-picked comparisons favored by the NRA.

What may be the most comprehensive study ever undertaken on the subject, the study conducted by Santaella-Tenorio et al, actually compared 130 other studies in 10 countries, and concluded that there is a strong correlation between the implementation of stricter gun laws and the reduction in gun-related violence. That may not be the final word, but it’s the best we have at this point. Accordingly, it would be more logical to err on the side of too much “gun control” rather than too little — if indeed it’s even possible to have too much.