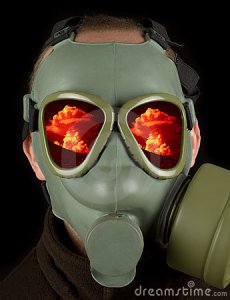 “And Lord, we are especially thankful for nuclear power – the cleanest, safest energy source there is. Except for solar, which is just a pipe dream”.        —Homer Simpson

Earthquake. Tsunami. Radiation. Japan was certainly struck with its share of disasters this month. And as a result, the U.S. was struck by a huge wave of hot air. Not produced by nature or technology, but by the media, as the pro-nuke punditocracy raced to assure us that things like this don’t really happen, and even if they do there’s no sense in getting alarmed because there’s no way radiation would harm the Japanese people (since that’s never happened before), and even if it does it couldn’t happen here, so we should forget the dangers and go full speed ahead with nuclear plants, just because, and if you question that then you must be tree-hugging  librul moonbeam jockey or something.

I heard people point out that the only ones who were questioning the advisability of nuclear power at this time were the ones who’ve always done so. To which one can only respond: “Well. duh.”  But it was the others, the ones who believe that expediency and profit trump all else, who have been dominating the “debate” in the media. (For the kind of informed, intelligent debate on nuclear energy that you probably won’t see on TV, go to TED Talks.)

To some, it seems distasteful that the topic should come up at all. There is a pervasive attitude about radiation hazard that is somewhat like the Victorian mindset about sex: everybody knows it exists but acknowledging it is deemed an impropriety. I heard an RRR (Rabidly Right-wing Relative), apparently reciting a Fox talking point, say, “Well look, we have hundreds of people killed by the earthquake and the tsunami, but some people are obsessed with radiation, which hasn’t killed anybody.”

Even though I was all too aware that the opinions of RRR’s are infallible even when they’re secondhand, I felt compelled to point out a couple of key differences here.

First, earthquakes and tsunamis are more or less instantaneous; and in this case they’re already past tense and we’re just dealing with the aftermath. Radiation, on the other hand, may not makes its effects known for years, even decades. (Care to ask the Japanese about this?) To say that the radiation hasn’t killed anyone is to make an extremely premature call.

Second, nobody knows how to prevent an earthquake or tsunami. Nuclear disasters, on the other hand, are one hundred percent preventable.

The question of whether they should be prevented with certainty (by eliminating nuclear power)- in other words, the question of how the risks stack up against the benefits, is open to debate. But the very existence of risk itself is not. Everybody knows it’s real. Well, everybody except this person maybe. Even the interviewer, fellow Fox funhouse fanatic Bill O’Reilly, is taken aback by this one.

With the exception, however, of this one sad individual who clearly is making yet another desperate attempt to draw attention to herself, we all  are more or less aware of the danger. We just prefer to look the other way. Because that’s what the punditocracy says we should do.

And in that regard, it’s very hard to come up with a more apt quote than this, from former Secretary of the Treasury Paul O’Neill: “If you set aside Three Mile Island and Chernobyl, the safety record of nuclear is really very good.”

Other than that, Mrs. Lincoln, how did you like the play?