The Myth(s) of the Ten Commandments 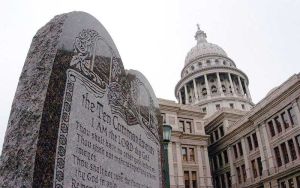 If, like most Americans, you grew up in a Judeo-Christian environment, then you’ve surely had plenty of exposure to The Ten Commandments. Or at least you probably think you have. Lawsuits and fierce debates have been waged over the decalogue, and religious propagandists have argued that those two stone tablets are the very foundation of western civilization. But the decalogue is not set in stone. In fact, many things commonly believed about the Ten Commandments are demonstrably false.

Chapter and Verse?
First of all, contrary to what you’ve been taught, this set of commands cannot be found anywhere in the Bible. Nowhere. At least not in the form commonly stated. But hey, it’s close. It’s actually a rather condensed version of two biblical passages (Exodus 20: 2-17 and Deuteronomy 5: 6-21) . It may seem trifling to make an issue out of some minor editing, but it’s actually illuminating, because the would-be theocrats who want to shove the Ten Commandments in your face are generally fundamentalists who claim to get their authority as self-appointed guardians of (other people’s) morality from a strict reading of “scripture”, with nothing added or taken away. But they’re not exactly practicing what they preach.

One thing the anonymous editors changed is the number of commandments listed in the Bible. It’s actually as many as 17 in the book of Exodus and as many as 21 in the book of Deuteronomy, depending on whether certain statements included in the lot should be considered commandments. One is reminded of the scene in the Mel Brooks movie when Moses comes down the mountain carrying three stone tablets and says (quoting from memory here) “My people, I bring you these fifteen — oops!–ten — TEN commandments.”

Except that they’re not really called commandments at all, not in the Bible. So what? Why shouldn’t you call them commandments even if God doesn’t? Well…

Because there is another set of statements in the Bible that IS specifically referred to as The Ten Commandments. (Exodus 34: 11-26) though again the numbering is fuzzy. (What does God have against math, anyway?) Though there are some similarities to the other two sets, there are also some interesting gems like “Thou shalt observe the festival of weeks” and “Thou shalt not seethe a kid in its mother’s milk”. Not to mention some instructions for cutting down the altars and “sacred poles” of  other nations, and taking their daughters for wives.

Can you imagine some arrogant Alabama judge defying the law over divine instructions like these?

And then there’s the first set of stone tablets that God dictated to Moses, who then smashed them in a hissy fit before anyone could read them. Supposedly the next set was a carbon copy; but it’s clear from these passages that Yahweh either had a poor memory or just changed his mind a lot.

Someone once commented that fundamentalists might benefit if they stopped thumping their Bibles long enough to actually read them. There are few things that illustrate this truth better than the obsession over the so-called Ten Commandments.