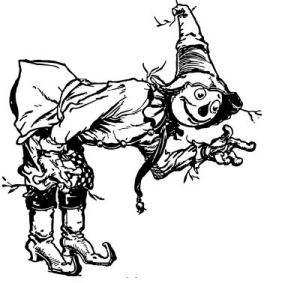 Once upon a time when I was a teenager and didn’t know any better, I got into a discussion (i.e. argument) with a relative on a topic that he had strong beliefs about. That topic was the hazards posed by certain chemicals used in growing and processing food — a hazard which, he was convinced, was nonexistent, but was merely a fraud concocted by devious scientists, or the government, or some other “them” who couldn’t be trusted. At one point, he said to me, ” if it wasn’t for chemicals, you couldn’t live.” Although I wasn’t even familiar with the term at the time, this was my first real awareness of the straw man tactic, which is the sixth in our series of propaganda techniques.

A straw man is an oversimplified substitute for an actual issue or another person’s actual position on an issue.  Although the term’s origins are unclear, the apparent idea is that metaphorically, someone constructs a cheapened likeness of another person (or position) and knocks it down, then claims to have struck down the real person (or position). I’d never said that all chemicals are harmful; I was perfectly aware, in fact, that the human body is made of them. What I was saying was that it’s a good idea to be informed about what chemicals are harmful and to avoid them if possible.  That’s an argument that’s much harder to dismiss than the watered-down version my relative threw back at me.

You’ve surely had plenty of straw men thrown in your face; there’s not much way to avoid it. If you mention to anyone, for example, that you’re opposed to the war (any war) you’re quite likely to hear someone say “How can you not support the troops?” Or “Why do you hate America so much?”. Or something like that. Mention that you favor reproductive choice, and you’ll surely be labeled “pro-abortion”, and you may even hear someone say that you support “killing babies”.  Either of which constructs a straw effigy in front of the real problem of how to prevent unwanted pregnancies.

In April 2010 the state of Arizona passed Arizona Senate Bill 1070, putatively aimed at curbing illegal immigration. Many citizens, not only Arizonans, expressed concern and outrage because some provisions of the bill opened the door to harassment of legal immigrants or even natural-born citizens of darker complexion.  (Do you suppose it’s just a coincidence that the bill has connections to white supremacists?) But ideological extremists who spoke of opponents to the bill almost uniformly characterized them as being anti-immigration reform, or pro-illegal immigration, or some other such straw personage, often even suggesting that those bleeding-heart libruls who didn’t like the bill should just invite all the filthy scum illegals to come and live in their neighborhoods.

Now it’s certainly possible that some of these people honestly don’t know the difference between objecting to a specific law and objecting to the broad objectives the law supposedly addresses (I’m glancing in your general direction, Ms. Malkin). But some of them did a deliberate switcheroo, replacing substance with straw. Well, after all, they were taking their cue from the straw twins embedded in the bill’s official name: The Support Our Law Enforcement and Safe Neighborhoods Act, which implies that law enforcement officials strongly support the measure, and that brown people from south of the border are responsible for higher crime. Both of which are, to say the least, unsupported conclusions.

Chances are that at some time during the past few months you’ve seen this graphic making the rounds on the Internet:

The idea, of course, is to suggest that the participants in the Occupy Wall Street movement are sniveling hypocrites for being anti-corporation when, like the rest of us, they use products manufactured by corporations. Trouble is, the Occupy movement was not organized to protest against corporations. It was organized to protest against corporate greed, corporate crime and corporate domination of government policy. Those are things that many Americans are concerned about, including many who revile OWS.  But it’s a lot simpler and a lot more effective just to dumb down the OWS position as being “anti-corporation”. Don’t strike a match with so much straw flying around.

Almost every criticism/ attack I’ve heard directed at OWS has been a straw man. Indeed, if you’re one of those who are generally classified as “liberal”, you surely get attacked by scarecrow platoons on a regular basis.  “Liberalism” is a rather broad and nebulous concept — much more so than “conservatism”, which is itself a rather imprecise label. And since the lifeblood of propaganda is oversimplification, it makes sense that those who smear “liberals” will dumb down their talking points and employ vast hordes of straw figures to make their case. (“Conservatives”, by the way also tend to invoke reverse straw men to present their own convictions — which is to say they oversimplify them in a positive direction. They might attire their belief, for example, in a supposed Second Amendment right to own guns as “supporting the Constitution”. What they mean in is that they support their own dubious interpretation of one little segment of the Constitution.)

In fact, my absolute favorite single source of straw men is Liberal Logic 101, which has the avowed mission of pointing out the inconsistencies and stupidities of “liberals”; but the site would be more accurately called Straw Man of the Day. Let’s look at a couple of recent examples of its wit and wisdom: 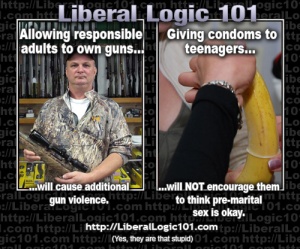 This one’s a double whammy: it suggests, first that “responsible adults” are the main target of firearm regulation, and second that it really matters whether teenagers “think premarital sex is okay”.  Comparing an innate biological drive with a culturally conditioned addiction,  this cutesy graphic sidesteps two genuine issues: (1) The dividing line between “responsible” and “irresponsible” adults (as if adults were the only ones affected by guns) is often crosshair-thin; and a gun blurs that line faster than just about anything else in the known universe, and (2) Teenagers already think sex is pretty okay; and they’re going to go on thinking it’s okay unless adults inflict some extremely heavy psychological damage; and it just might be prudent to be more concerned with preventing pregnancy and potentially fatal disease than with trying to reprogram their hormones. It’s an artificial dichotomy (something straw-sculpting propagandists just love) to suggest that one must choose between discouraging premarital sex or being prepared for lapses in judgment.

Is there really anybody out there who honestly doesn’t realize that President Obama has been subjected to more “background checks” than the Pope? Apparently so; and this straw men seems to be an attempt to recruit more devotees to birtherism. Or any of the other Photoshop conspiracy theories accumulating around the president. If gun owners were scrutinized with a microscope even a fraction as big as the one that has been trained relentlessly on Barack Obama, gun regulation advocates would be ecstatic. And chances are that just about everyone would be a lot happier, because there’d probably be far less gun crime.

Gosh, these are like eating peanuts — once you get going, it’s hard to stop. Let’s try one more for good measure: 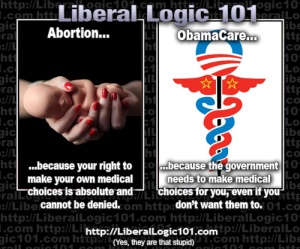 The notion that “Obamacare” entails the government “making medical choices for you” has been a heavily used straw man since day one, and not one sliver of its straw has worn off. “Government takeover” is the straw phrase of choice that has been brandished against the Affordable Care Act ever since “socialized medicine” started wearing thin.

These priceless bagatelles from Liberal Logic 101 always end with the observation that “Yes, they are that stupid.” Well, it does appear that somebody is trying very hard to be “that stupid” — or else just very crafty. In any case, I recommend perusing the pages of that website if you’re seeking some textbook examples of straw men.

But really, you don’t have to seek them out at all. They’ll seek you out instead. It seems that straw men are breeding faster than mosquitoes in a swamp. I seem to hear more and more and more of them all the time. Ironically, I also seem to hear more and more instances of “phantom” straw men — i.e., people falsely claiming that someone else has used a straw man.  (See, for example, the attack on one of my previous posts at TheTruthABoutGuns.com and/or my response to it.) Yes, we’ve reached that bizarre point in the so-called evolution of our species when the perception of a straw man has become itself a straw man.