More on the Myth of Hitler’s Gun Ban (Part 1) 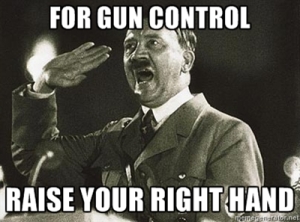 Thanks to a routine gun massacre at a school, a plug of this blog by Randi Rhodes, and the routine level of rabidly hateful insanity spewing out of the Second Amendment crowd, my previous post on The Myth of Hitler’s Gun Ban, written more than a year ago, has suddenly been catapulted through the stratosphere, at least by my readership’s usual standards: more than 32,000 hits in one day alone. And I’m pleased to see that, for the most part, the new comments have been civil, informed, and sometimes thought-provoking. This even applies to many individuals who chose to challenge my research.

And then there are the others: the gun fanatics who resent being deprived of one of their pet myths, and come out with hardware blazing in an effort to hold onto it. Some have accused me of being “misleading”, though they haven’t been able to tell me exactly how I’ve misled. Some have suggested that I’m an admirer of Hitler myself; or that I want to take away their guns like he didn’t; or that I’m anti-Semitic for pointing out that the Jews were unable to resist Nazi oppression.

For some of these folks, it’s very, very important to believe that Hitler banned guns, because their window on the universe looks something like this: (1) President Obama is trying to ban guns; (2) Hitler banned guns; (3) therefore Obama is Hitler reincarnate; (4) therefore we need to prepare for the day when he’ll come banging our door down and dragging us off to a FEMA concentration camp, where we’ll be either converted to Islam, or will be tortured and killed; (5) thus, we must stockpile as many weapons as possible and coincidentally stack up some healthy profits for Lord LaPierre and company.

“The first thing a tyrant does”, they often say, “is take away people’s guns”.  Whereupon they point to a string of historical dictators who supposedly did just that, and proclaim that President Obama belongs in that nefarious procession himself. They’re quite mistaken on every count (for one thing, tyrants seldom attach as much significance to “gun control” as gun nuts do), but as one gathers from their frequent attempts to politicize the gun debate to the nth degree, it doesn’t matter whether you have the right facts, so long as you have the right ideology.

I recommend reading the comments on the original post, but the following is an attempt to address objections, shed some additional light, and summarize and reiterate some salient points:

No amount of devious spin can alter that fact. Sorry. Get over it, already.  Even GunCite (a pro-gun website that, unlike other pro-gun websites, generally does some solid research) acknowledges as much. The Nazis inherited a system of firearm registration and regulation that was already quite strict, though it also did not, by any means, amount to a gun ban. And the gun law they passed in 1938 actually loosened those existing regulations considerably.  Regulations were still stringent. But to call it a “gun ban”, is… well, misleading at the very least.

Okay, I admit it: I may have goofed. In debunking the popular Hitler gun “quote” (you know, the one beginning “This year will go down in history”), I noted that he did say this:

“The most foolish mistake we could possibly make would be to permit the conquered Eastern peoples to have arms. History teaches that all conquerors who have allowed their subject races to carry arms have prepared their own downfall by doing so.”

From which I deduced:

So it’s fair to conclude that he believed “gun control” had its uses.

Okay, but a great deal depends on what you  mean by “gun control”.  I may have goofed by cutting Der Fuhrer off too soon. Just a couple of sentences later, he added this:

“So let’s not have any native militia or native police. German troops alone will bear the sole responsibility for the maintenance of law and order throughout the occupied Russian territories, and a system of military strong-points must be evolved to cover the entire occupied country.”

This suggests that his real concern about “conquered peoples” having arms was really about them having organized armed forces, not merely armed citizens. And he was referring specifically to governing the conquered “Eastern peoples” (i.e., Russians) rather than Germans.

The Nazis loved their guns. They loved guns almost as much as today’s American Gun Worshiping Cult that compares Obama to Hitler. They loved guns so much, they taught children to march and drill with them, starting as early as five years of age. The nursery rhymes these children heard encouraged them to play with guns. Does that sound like something Nazis wanted to outlaw?

While I’m hesitant to consult white supremacist organizations on anything, it’s interesting to note that the National Alliance, which has a certain amount of reverence for both firearms and fascism/white nationalism, has this commentary ,which lays out some of the specifics of the 1938 law. It’s excerpted from a book that includes the complete text of the law, both in English translation and in the original German.  For what it’s worth, the commentary concludes with the declaration that it was not Hitler, but his enemies, who advocated for “gun control”. Quite the reverse of the claim made by gun enthusiasts who (presumably) do not admire Hitler.

Salient Point # 2: Yes, the Jews were barred from gun ownership. So what?

They were barred from a lot of things. Like voting, owning businesses, working in professions, attending schools, patronizing cinemas or theatres, and visiting public parks or “Aryan” areas. Jews were not considered citizens in Nazi Germany (and in a very real sense they weren’t even considered human), and gun ownership was one of the perks of citizenship. The fact that the gun culture considers the Jews’ lack of guns of more consequence than their lack of far more basic civic rights says a great deal more about the gun culture than it does about the Nazis or the Jews. And even when they get it right about what the German gun laws did or didn’t do, they misrepresent the significance and consequences of those laws.

And we say laws in the plural because there were indeed more than one. We’ve been discussing primarily the German Weapons Act of 1938, passed in March of that year, which as we’ve noted before, significantly deregulated firearms. It also prohibited Jews from manufacturing and selling them; one gets the impression that the intent was to prevent Jews, whom the Nazis regarded as subhuman, from handling the sacred implements of power that they later would touch with their own hands. Even so, note that this law itself did not expressly ban Jews from owning guns.

It wasn’t until November of that year that a different law, The Regulations Against Jews’ Possession Of Weapons, did what its name suggested. That’s right: even though they’d subjected the Jews to just about every form of degradation and brutal oppression possible, it took the Nazis  five years before they actually got around to barring Jews from owning guns. Gives you some indication just what an all-consuming priority it was, doesn’t it? Furthermore, this law was passed only after Kristallnacht, which might have given Jews an incentive to retaliate violently.

“Aha”, says the gun fanatic, “so obviously the Nazis were concerned about the threat of an armed populace”. Well sure, to some degree; but let’s not blow it out of proportion. Just because they wanted to prevent a few of their own from getting killed or wounded in the line of duty didn’t mean they gave any credibility to the Tea Party wet dream of a small contingent of armed citizens overthrowing their government. As one of my readers so astutely observed, if they’d encountered armed resistance at the first two houses they came knocking at, then at the third house they would have stopped knocking and just started shooting.

In a statement issued by the Anti-Defamation League, national director Abraham Foxman, a survivor of the Holocaust (you know, the one that didn’t really happen), said:

“The idea that supporters of gun control are doing something akin to what Hitler’s Germany did to strip citizens of guns in the run-up to the Second World War is historically inaccurate and offensive, especially to Holocaust survivors and their families.”

But hey, just because someone was there and actually lived through it doesn’t mean they can match the expertise on the subject exhibited by Glenn Beck or Ann Coulter, does it? Incidentally, the ADL has politely urged people to refrain from using Hitler as a political scarecrow. Do you really think anyone’s gonna listen?