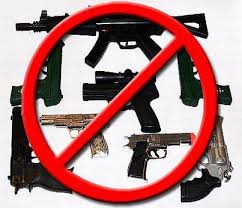 Polls indicate that most Americans prefer stricter gun laws.  That includes even most gun owners. Even NRA members tend to favor gun restrictions of some kind or other. Yet the NRA itself, guided by such voices of sanity and reason as Wayne LaPierre and Ted Nugent, has succeeded in making “gun control” a dirty word, portraying it as more evil than gay marriage.

The attack on “gun control” is two-pronged. First, it is pegged as an enemy of “liberty”; and second, it is proclaimed to be ineffective or even counterproductive. We’ve touched previously on the first absurdity — that regulating firearms is an encroachment upon freedom or constitutional rights — and will be examining it even more in the future. For the moment, let’s focus on the second. There are at least 7 reasons why the credo that “gun control doesn’t work” should be taken with a grain of saltpeter.

The veracity of any statement is only as good as its meaning. And with the sentence, “Gun control doesn’t work”, there is just way too much leeway to make a positive declaration of its accuracy.  What is “gun control”, anyway? Well, it’s not any one thing. It’s a pejorative designation for a very wide variety of regulatory measures, from the legendary and chimerical total gun ban to a simple background check or waiting period. And what does it mean for such a measure to “work”? Would it have to eliminate crime or gun violence altogether? Or at the other extreme, could it be counted successful if it prevented only a single such incident?

2. They don’t entirely buy their own medicine.

Whenever there’s one of those all too routine mass shootings, gunsters scramble to defend guns from being implicated in the massacre, and to point the finger of blame instead at anything else they can, from video games to abortion. So far, they’ve never blamed solar flares or pork belly futures, but be patient.

One of their favorite whipping boys is mental illness. After all, these mass killers are often rather disturbed. So, say the Second Amendmenters, maybe it would be a good idea to address the problem of mental illness rather than to “blame the gun”. But what exactly would it entail to address the problem of mental illness? Well, in terms of preventing these violent acts, it must involve, among other things, ensuring that these disturbed individuals don’t get their hands on deadly weapons. And don’t look now, but that’s a form of “gun control”.

Nor is the self-contradiction among the gun culture merely theoretical. They not infrequently put it into practice whenever their own safety is at issue. When Dick Cheney addressed an NRA convention a few years ago (and it wasn’t exactly the most brilliant PR maneuver to make him the poster boy for the virtues of responsible gunmanship, but hey), the most extreme of “gun control” measures was put into place: a total ban on firearms in his presence. Which is certainly a prudent and reasonable measure. But it’s also quite counter to the avowed values of the NRA, as espoused and championed by Cheney himself. If guns are so cool in society at large, shouldn’t they be double plus good in a controlled environment filled with responsible gun owners? It was a golden opportunity for him to put his gun barrel where his mouth was, but he blew it big time.

Yet it isn’t at all unheard of for NRA conventions to prohibit guns or at least firing pins at some of its venues. Of course, NRA spokeshooters will defend their beloved benevolent fraternity from charges of hypocrisy (and in the process take an obligatory potshot at “gun control” groups) by insisting that convention officials are merely following the local laws and regulations in whatever community or site the event is being held. And it was Cheney’s secret service, not the NRA, that insisted on the pat-down.

But the organization chooses the locations for its own conventions and the spokeshooters who speak at them. What kind of message is it supposed to convey to rant about the evils of “gun control” while making choices that require abiding by it? (And don’t even get me started on what it suggests about your character to be consorting with the likes of Dick Cheney in the first place.)

3. The past is not the future.

But what if the NRA is absolutely right? Suppose “gun control”, whatever that means, absolutely “doesn’t work”, whatever that means. What exactly would it mean? It would just mean that it has not been successful so far. That does not preclude the possibility that it will be more successful in the future. No, it isn’t just a matter of blindly repeating the same thing and expecting different results; it’s a matter of finding what does produce results. Thomas Edison reportedly experimented 1000 times before perfecting the light bulb. Should he have given up long before then? And medical researchers still haven’t found a cure for cancer. Should we conclude that cancer control is a lost cause?

4. The world is not a laboratory.

The thing is, there’s just no way to know for certain whether or to what extent “gun control works”. Because in the real world, unlike in a laboratory, you can’t totally isolate factors to determine cause and effect. What works in one community may not work in another. What works now may not work 10 years from now — or vice versa. All we can do is draw reasonable correlations.

5. There’s evidence that it does work.

The correlations that gunsters focus on are cherry-picked statistics indicating, of course, that “gun control” is a deadly mistake. We’ve already mentioned the cherry picking they often do with The Chicago Gambit and The D.C. Gambit. Both illustrate a widespread tendency among the gun culture to seize the thinnest slices of statistics to back up their pet cause.

The human species has a long, persistent history of asking the wrong questions, giving the wrong answers to them, and becoming obsessed with both wrong question and wrong answer. We’ve already discussed, for instance, the issue of abortion: many people are obsessed with trying to argue that abortion is a terrible thing (which we all know) or that a fetus should be afforded all the privileges of personhood (which folks are unlikely ever to agree on), while the real question is how to prevent abortions (which everyone wants to do).

And so it is with guns.  We’ve already mentioned the widespread obsession with whether Hitler banned guns (he didn’t) and whether the matter has some profound relevance for contemporary America (it doesn’t.)  And as mentioned above, gunsters often attack “gun control” by arguing that they have a constitutional right to own guns (they don’t), while the more important issue is whether “gun control” would violate their rights (rarely if ever).

The very question of whether “gun control works” demands proof that stricter gun laws effect a quantifiable, verifiable, drastic and generally immediate reduction in crime. But as we’ve stated, such proof is impossible to produce. And the very question obscures more important questions.

Is the absence of “gun control” deleterious to a society? Does it constitute a kind of broken windows effect that attracts crime? Can societies with a tradition of loose gun laws (e.g., U.S.A.) reduce their crime by adopting policies comparable to those societies with a tradition of stricter gun laws (e.g., Japan)? How long would such a transition take? Are there other factors to be considered instead of, or in addition to, gun regulation? Can these factors be separated from, or are they inextricably linked to,  a society’s firearm mentality? Can we build a culture that values life more than it values the putative right to be armed — and has an appropriate type of respect for guns and the damage they inflict? Can we instill a more responsible mentality that does not automatically consider the gun the first/best solution to a problem? Why do people, particularly Americans, lust after firearms so much to begin with?

7. What is the alternative?

And this brings us to the most crucial question of all. Gunsters often denigrate “gun control” by insisting that if bad guys want to get their hands on guns, they will do so no matter what laws are in effect. One might as well say the same about the offenses of thieves, rapists and murderers. Why have any laws at all? Why not live in a “limited government” Shangri-La where you can do whatever you damn well please as long as you have sufficient firepower to stop anyone from stopping you?

In this case, they have a valid question, but they’re still giving the wrong answer. The purpose of proscriptive law is not to transform bad guys into good guys, but to help prevent good guys from becoming bad guys; and to define bad guy behavior and prescribe appropriate penalties. The alternative is dystopian chaos and vigilante justice.

A world without “gun control” is a world with no restrictions on guns at all. It’s a world in which a six-year-old with enough funds can purchase an Uzi as easily as a Hershey bar; why bother making it illegal for a child to buy a gun if indeed “gun control doesn’t work”. Is that really the kind of world you want to live in?

For that matter, how comfortable would you really feel strolling through Grand Central Station if you knew that every character passing through it was armed? Before you respond with a knee-jerk NRA soundbite or bogus “statistic” on gun defense, think about it long and hard. And think about it honestly, since nobody is going to be peeking at your answer. Or if they do, you can always just shoot them.