Should Propaganda Be Penalized? 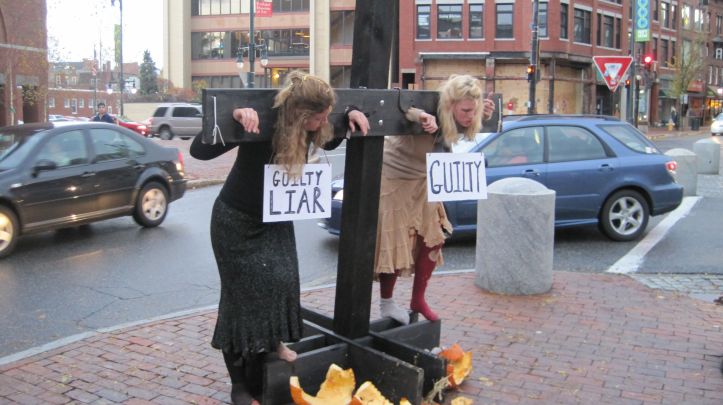 On March 5, Pastor Frank Pomeroy was sitting in his car outside his church in Sutherland Springs, Texas when a man and woman approached and began vandalizing a poster on the church where a horrific massacre had occurred 4 months earlier.  When he confronted them, they recognized him and began verbally accosting him, calling the bloodbath a fraud and insisting that Pomeroy’s daughter, who was killed in the massacre along with 25 other people before his eyes, never even existed. “Show me her birth certificate”, the man yelled, “show me anything to say she was here.”

Sadly, this incident was not unique. There is a growing army of delusional people out there who believe that every gun massacre or domestic bombing is a “false flag” staged with “crisis actors”. Many of them also believe that astronauts never landed on the moon, that Obama is a Kenyan Muslim, that 9-11 was an inside job, that climate change is a hoax, that the holocaust never happened, that Hillary caused the deaths in Benghazi, and/or that the earth is flat.

In discussing this massive “stupidification” of America, columnist Leonard Pitts asks exactly what, if anything, one should say to such folks. And the clear answer, as he duly concludes, is nothing. These individuals are utterly beyond reason because of a hopeless mental incapacity — whether due to deficient intelligence, disconnect from reality, intellectual laziness, the tunnel vision of ideological fanaticism or some combination of the above. Until they obtain professional help, or experience a paradigm-shifting cataclysm,  there is nothing anyone can do to convince them that black isn’t really white in disguise.

But there is a more vital question that Pitts neglected to pose. The mentally warped have always been with us. But the phenomenon we are now witnessing is peculiar to contemporary America. No matter how mentally incapacitated people are, there would not be such a mass subscription to the same nutty delusions if those ideas hadn’t been planted in their heads by someone else. For the past three decades, there has been a concentrated campaign to deliberately “stupidify” America for the personal profit of the demagogues doing the brain-planting. And the real question is, should those manipulators be held accountable for their actions?

Many people will maintain (at least in reference to propaganda that supports their own beliefs) that such an exercise would be a violation of First Amendment rights.  Horsefeathers, balderdash, poppycock and codswallop.

Freedom of expression is not absolute. Sometimes “expression” crosses bounds of civilized conduct; and it’s generally easy enough to determine when that occurs. There are laws, for instance, against “free speech” that constitutes slander and libel. It’s difficult in the U.S. to win lawsuits for these offenses, but it isn’t because guilt is hard to establish; on the contrary, it’s usually quite easy. But due to a strained reading of the First Amendment, the American legal system heavily skews such cases toward the defendants (particularly since they’re often individuals of power and prestige).

The usual litmus test for slander and libel is whether the false statements are injurious to the subject’s reputation (which quite often translates to whether it might cause them to lose money somehow). Shouldn’t there be at least as stringent a safeguard against someone being subjected to the kind of emotional cruelty that this minister was?

And what about the possibility of bodily harm and even homicide? There are also laws against “free speech” that incites violence. Remember Pizzagate? That little bit of right-wing lunacy almost got people killed. And the next time, we might not be so lucky. How many lives must be lost before we think it’s justifiable to put a damper on this kind of “freedom of expression”? Libel and slander are punishable by fines.  Inciting to violence is punishable by imprisonment. Pizzagate-type narratives often fall into both categories, in addition to being seditious.

But there are other means of penalizing propaganda without criminalizing it.  Recently, Great Britain barred visits by several American promoters of Pizzagate, white nationalism, and theories about “white genocide”. In refusing them entry, British authorities (quite understandably) designated them as potential troublemakers and a corrupting influence on society. Quite predictably, American reactionary pundits took up the torch for these individuals, calling them “reporters” (they were actually bloggers and trolls) and declaring that they had been refused entry merely for being “conservative”. And needles to say, they invoked the ever-handy straw-filled whipping boy of “political correctness”.

But the transgressions of such people go far beyond merely having or expressing a political viewpoint. Hateful and delusional narratives of the type spewed out by Fox “News” et al are slanderous, seditious, and provocatory. Yet they get away with it all day long, every day. (Bear in mind that this is in the same country where TV personalities can be fined heavily for uttering the f-word on broadcast media even once. ) It’s quite possible that some of the ideologues of Fox and Breitbart and other cesspools actually believe the lies they peddle (see Jones, Alex) — in which case they wouldn’t be guilty of lying themselves. But is that any reason they should be allowed to hawk them with impunity? Should kids be allowed to play with loaded guns just because they imagine them to be light sabers?

Such a suggestion invariably provokes, especially among Americans, the knee-jerk response that there is something tyrannical and Orwellian about detecting and squelching dishonest and manipulative communication. They declare it to be overstepping by the big bad guvmint that will lead to all kinds of totalitarian consequences. They claim that it reeks of the “thought police”, and of government trying to shut down anyone who has a “dissenting opinion”. But contrary to the official spin in this Age Of Alternative Facts, not all beliefs are created equal. There are clear lines of demarcation between matters of opinion and matters of fact; and while scurrilous opinions may be relatively harmless, scurrilous lies can be very damaging indeed. (There is a middle ground: analysis, which is necessarily subjective. But it’s also clearly distinguishable from mere opinion and belief on one side and blatant falsehood on the other.)

Did we mention that most Americans seem to have no problem with the government imposing six-figure fines for saying “fuck” on TV? They also have no problem with the government regulating vehicle traffic, since the alternative would be chaos, disaster and tragedy. Nor do they object to the government operating a system of criminal justice, since the alternative would be mob rule and vigilantism.  Yet they can’t seem to grasp that propaganda can have consequences just as dire.

Well, let’s humor them and imagine a government crackdown on propaganda extended to its most dystopian extreme. Let’s suppose, first of all, that in instead of, or in addition to, being obsessed with preventing profanity from falling on pristine public ears, the government also took punitive and preventative measures to curb dishonest and defamatory polemic. That would mean, most likely, that Fox, OAN and NRATV among others would close up shop. Oh, the unimaginable horror.

Let’s go even farther and imagine government regulation applied also to social media and the citizenry at large. Imagine, for instance, that Facebook received fines for allowing dishonest and inflammatory memes to be posted. That most likely would prompt Facebook itself to crack down and penalize its users who post such material — by, say, suspending their privilege of use for a few days. And the users, in turn, most likely would start being more conscientious about what they post, and maybe even do some actual research before they hit the Share button. As a result we would end up with a public that is better informed, more cordial to each other, more broadminded, more willing to cooperate with each other, and more prepared to make sound choices at the ballot box. Which is to say it actually would result in a public better equipped to stave off overstepping by the big bad guvmint!

Explain to me exactly how all of this would be such a terrible thing.