The Curse Of Reductionism 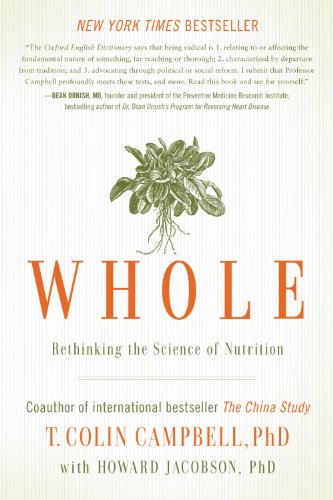 Chances are you’re not particularly interested in reading a book that might tell you your diet is killing you. After all, we tend to pick our foods based on what we like rather than what likes us; moreover, we form a strong emotional bond to what we eat — that’s one reason it’s so hard for some people to lose weight. But while the primary purpose of the book Whole by T. Colin Campbell, Ph.D. is to advocate for a whole foods plant-based diet (based on half a century of cutting-edge research), you might find it worth reading even if you have no intention of ever altering your grazing habits one crumb. Because more broadly, the book is also a searing indictment of reductionism, which long has plagued civilization in many different ways.

Not that it’s consistently a bad thing. Loosely defined, reductionism means substituting a simpler system for a more complex system. That can sometimes be rather useful. Pidgin English, for instance, can facilitate communication with individuals of limited English comprehension. There are also philosophical concepts of reductionism that may have merit, though they are the subject of debate.

But this book addresses a particular kind of reductionism, one that long has been the bane of progress and of civilization itself: the use of a limited set of facts, perceptions and concepts to dominate a worldview. Or, in other words, the use of a part to replace the whole.

A simple example mentioned in the book from the field of nutrition involves the popularity of vitamin-mineral supplements. Scientists have identified certain elements in certain foods, and certain benefits they provide the body. But those ingredients work in perfectly calibrated conjunction with all the other elements in those foods; if we isolate them, we cannot expect them to provide the full benefit. Taking a vitamin C capsule may be better than nothing, but it’s just not the same as eating an orange.

And it’s not just nutrition; healthcare as a whole is hobbled by reductionism, at least in the United States. As Dr. Campbell comments, American healthcare would be more properly called American disease care, because it’s geared to treating specific symptoms of specific ailments rather than considering all of the body’s systems in conjunction with each other, and focusing on how they should function rather than on how they shouldn’t. In recent years, holistic medicine has made some inroads into the American medical establishment, but it still has a way to go before it moves out of the shadow of stereotypical New Age perceptions.

And it isn’t just nutrition and medicine. Science in general, Dr. Campbell points out, has its neck stuck under the iron boot of reductionism. And the primary reason is that in the U.S., science is driven by the same force that drives everything else: the profit motive. Scientific research in America tends to get funded by corporations that stand to benefit from a particular result. Dr. Campbell’s findings met with a great deal of resistance because myths about nutrition have become deeply ingrained in the American psyche; most people still believe, for instance, that drinking milk is essential to develop strong bones — a notion heavily promoted by the powerful dairy lobby through that pervasive and persuasive propaganda channel known as advertising.

This does not mean that scientists are dishonest or that scientific research is totally unreliable or that the cult of anti-science is correct to discard findings about climate science, evolution or any other topic. (More about this in a future discussion of the ideological assault on science.) Scientists, Dr. Campbell hastens to add, generally do the best they can under the circumstances; it’s just that they have to work within the confines of the American reductionist paradigm.

(Another recent book on nutrition and health, Eat Dirt by Dr. Josh Axe, details how Americans’ reductionist obsession with over-sanitization has weakened our body’s defenses and actually left us more susceptible to disease.)

And it isn’t just in matters of nutrition, medicine or science. Reductionism saturates, and often dominates, virtually every aspect of our lives. Religion, particularly of the fundamentalist flavor, is distinctly reductionist. People often zero in on particular passages from the Bible (or whatever their manual is) without putting them in context. Moreover, they often take such passages very literally, even if they were not intended literally.

And what is most likely to draw the public into the cinema to see a particular film? Almost everyone knows the answer to that: it’s the stars. Not the premise. Not the script or story. Not the directing. Not the cinematography. Not the scenery. And most certainly not the film as a comprehensive unit. Just the stars.

Government policy has been reduced to short-sighted measures to satisfy ideological beliefs and emotional responses to issues, without regard to the actual results and consequences of those policies. Excellent examples are abortion, capital punishment and immigration. Politics long ago was reduced to a matter of hyperpartisan one-upmanship, particularly on the right. Liberals generally realize that a healthily functioning society can benefit from both liberalism and conservatism; conservatives have become convinced that the eagle can fly with only one wing, and so the other one should be lopped off.  And conservatism, indeed political discourse in general, has been reduced even further to slogans and soundbites. “Make America Great Again”. “America First”. “Protect Our Borders”.

Imagine a hypothetical scenario (and it really isn’t that hypothetical, being a situation I actually encountered years ago) in which a major city has, say, 40 branches of its public library; but then because of budget cuts, yada yada yada, it decides that 2 or 3 of these must be closed. When you hear the announcement of which branches have drawn the short straw, it becomes clear how the decision probably was made: bureaucrats sitting in a comfortable office somewhere just looked at a map and picked out which branches are closest to other branches, and figured these could be sacrificed at no great loss. No consideration of what unique services and features those branches offered, or what unique populations they serviced. A drastic decision reduced to a matter of pure geography. In this scenario, reductionism determines not only the implementation but the evaluation of policy.

Media reporting on such matters is, I surely don’t have to tell you, drastically reductionist. News events are reduced to headlines, which are almost always woefully inadequate, quite often misleading, and sometimes even deliberately manipulated. Look at these two different versions of the same issue of Wall Street Journal. 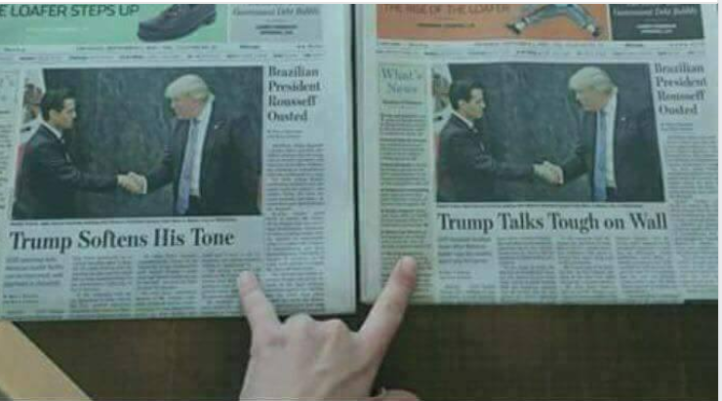 This appears to be a deliberate attempt at manipulation, and there’s even a claim on social media that these headlines were chosen to appeal to different markets in different parts of the country. In fact, they were printed at different times of the day, and supposedly reflect changing developments. What’s true in any case is that much more is needed than the headline; yet that tends to be the only thing people remember.

The story goes like this: the Clinton Foundation gives out only 5 percent of its proceeds in grants. Therefore, the other 95 percent obviously goes to line the pockets of the crooked Clintons.  The central fact of this rumor is almost accurate: the organization gives out 6 percent of its proceeds in grants, which is close enough to 5 to give a pass to the rumormongers on that point. The problem is this is not the whole story. The Clinton Foundation (which despite its name is not really a foundation at all, but a 501c3 charity) is not in business to give grants to other organizations. It’s in business to perform charitable services directly, which it does quite efficiently — earning the highest ratings from charity watchdogs year after year. The 6 percent for grants is in addition to this. And all of the Clintons volunteer their time to the organization without receiving a cent.

Albert Einstein is credited with saying that “everything should be as simple as possible, but not simpler”. Or words to that effect. Buckminster Fuller went even further, suggesting that overspecialization leads to extinction. He apparently was not referring to ordinary specialization; as Dr. Campbell emphasizes in Whole, specialization in its proper place is vital; we need heart surgeons and dermatologists just as surely as we need general practitioners. The problem occurs when specialization is not put in proper perspective. It may not always be true that the whole is greater than the sum of its parts, but it’s certainly true that the whole is greater than any one part.

It’s hyperbolic to declare the imminent collapse of civilization — a warming that’s been issued for millennia — but civilization does take occasional backward steps. And nations do indeed collapse. It’s hard not to imagine that such an eventuality is quite possible when vital parts of the social construct are being removed or ignored.