The Very Predictable (and Predictably Despicable) Right-Wing Responses to Christchurch

The massacre of 50 people at two mosques on March 15 was different from most mass shootings in at least two respects: it didn’t occur on U.S. soil, and the targets were Muslims. But it was quite similar to most such incidents in many other respects — including the fact that the perpetrator was a right-wing radical; such individuals commit far more acts of terror than do Muslims. (And indeed, even Muslims who engage in terrorism are themselves right-wing radicals of a different flavor.) And as with every other gun massacre, the responses from right-wing extremists in politics and media have been utterly predictable, tasteless and vile.

They’re essentially variations on the same themes you’ve heard after Charleston and Roseburg and Las Vegas and Orlando and Dallas and Baton Rouge and every other mass shooting : both sides do it;  it was a “false flag”; how dare you suggest that my rhetoric encouraging hatred and violence might actually encourage hatred and violence; what we really need is more guns; oh yes abortion, just because abortion; and don’t you dare use technically imprecise terminology in labeling the murder weapon.

And if the shooter is Muslim or any other variety of dark-skinned foreigner, you also can bet on talking points about tougher immigration laws. Curiously, this also happened on this latest occasion, even though it was the victims and not the shooter who were Muslim.  A multi-faith vigil for the victims in Cleveland was disrupted twice by a fellow driving by displaying a conspicuous float that supports “the wall”. This person (who reportedly is unemployed and lives with his mother, subsisting on donations through his grift) has been on a tour with his conspicuous float to disrupt many such events. He does this, he says, in the cause of “unity”; and he calls his project Unitybridge. I’m not making this up.

Over at fairandbalanced Fox “News”, Tucker Carlson lamented that the response to the massacre by those of us in the sane segment of society might be an effort to “curb free speech”. Bear in mind that to people like him, “free speech” means being able to make hateful and idiotic comments whenever and wherever you like with absolutely no consequences or repercussions.  It was a very opportunistic opportunity for Tuck, who’d already been under fire, as it were, for a recently unearthed video from 10 years ago of him making very bigoted comments — rather like the very bigoted comments he’s been making on air ever since then.  Not surprisingly, he has become a media darling of white nationalists.

Some prominent reactionary figures made what appeared to be conciliatory, even benevolent remarks about the massacre; but given their histories of being Islamophobic gun enthusiasts, it isn’t hard to divine that they were just covering their own asses.

A good example is Dana Loesch, whom we’ve encountered before. Here’s how she weighed in. 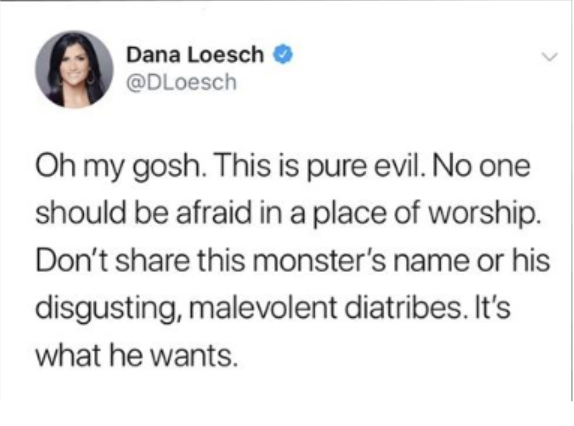 On the surface, those seem like admirable sentiments, right? It’s certainly not a good idea to give mass murderers free publicity, as people so often do. (And I’m pleased to see that many people, including the prime minister of New Zealand, are catching on to this.) But what do you suppose she would have said had the shooter been a Muslim instead of a fellow right-wing Muslim hater? Never mind, we don’t have to wonder. We already have the answer. 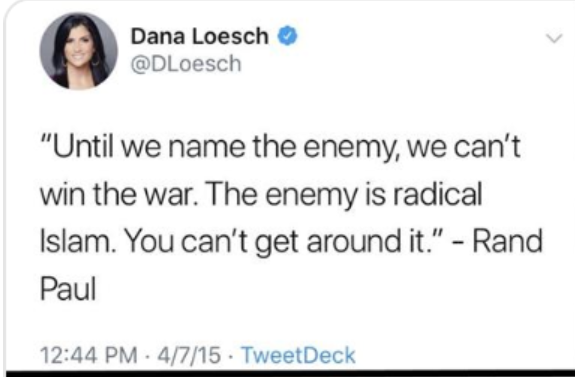 These people can’t even express noble sentiments without being hypocritical and self-serving. So, Dana and Rand, if radical Islam is the enemy when a Muslim is the killer, what is the enemy in those far more frequent cases when white right-wing radicals are the killers? Take your time getting back to me with your answer.

Touting the one thing most important to her, the solution to all her problems, Loesch also made the false claim that the New Zealand massacre was finally halted by the fabled “good guy with a gun”. What actually happened was that the hero tried to distract the gunman with anything he could get his hands on — including the gunman’s own discarded and EMPTY weapon, which the hero used to smash the gunman’s car window. It also included a credit card machine. Maybe we should form a National Credit Card Machine Association to put one of those suckers in every home, and add a constitutional amendment protecting everyone’s right to own one.

As Media Matters observes, Loesch failed to correct her perversion of the truth in subsequent media appearances to bemoan how she was “publicly lynched” at a town hall meeting in the aftermath of the Parkland shooting. She voluntarily attended an event full of grieving gun victims in order to convince them how wonderful guns are, and she claims she was “lynched”. As you may have noticed, the kind of people who are fond of calling other people snowflakes tend to take great personal offense at every little thing imaginable.

Another demagogue cut from the same cloth is Ben Shapiro, whom we’ve also crossed paths with before. A couple of times.  Here’s his oh-so-benign tweet.

Trouble is, this has a very hollow ring from a guy who’s been virulently anti-Muslim, and will go down in history, if at all, as the person who said “Arabs like to bomb crap and live in open sewage.” So obviously, he does not have a great deal of sympathy for the victims.  But he does have good reason to divert attention away from the shooter, his motives and his manifesto. They strike entirely too close to home.

In 2017, another far-right shooter attacked a mosque in Quebec. Like the killer in Christchurch, he was an admirer of the Forty-Fifth White House Occupant and all those basking in his stench. Here’s a list of his most frequent Twitter visits to polarizing right-wing figures.

Notice who wins the race by a landslide. Notice that the second place finisher also worked for Shapiro’s Daily Wire as well as Shapiro’s former cesspool, Breitbart. And note that Tucker Carlson also makes a very impressive third place showing.  Again, we must ask how Shapiro would feel about the policy of not naming killers if the killers were Muslim. And again, we don’t have to speculate.

But the grand prize for sheer classlessness in regard to the massacre surely must be awarded to Candace Owens, who as it happens was the topic of our previous post. Her engagement is particularly relevant, because the shooter named her as his biggest influence. But he also stated that she was — get this — too extreme even for him. A murderer of 50 people considers Candace Owens too extreme.  Now any healthily functioning adult with a shred of decency would have taken this as a cue to engage in a little self-examination; or at the very least, in a little bewilderment over what exactly the perpetrator was referring to. And how did Candace Owens respond? Exactly as you’d expect.

This is a blatant lie, which might be why she later deleted the tweet. She in fact has made numerous Islamophobic comments. But that’s only the beginning. 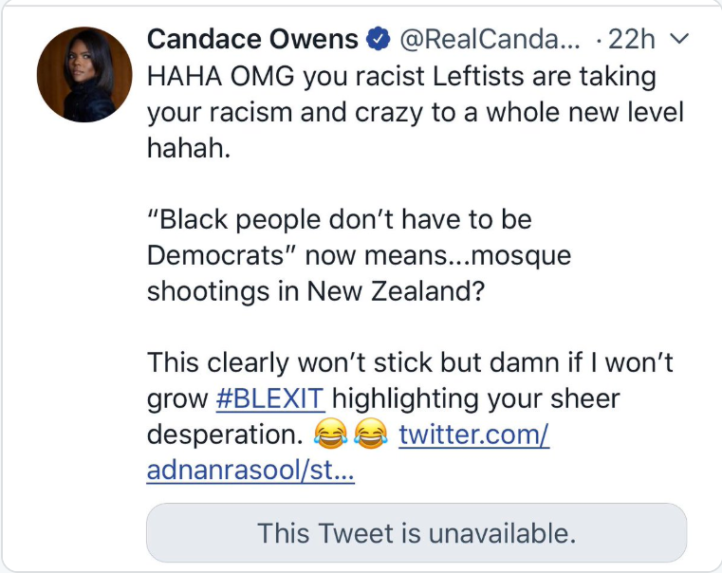 Wow, so many interesting things going on here.  Evidently she wants to present herself among other things as a gifted psychic psychoanalyst. She presumes to know instantaneously that anyone who mentions the shooter’s avowed admiration for her is both a “leftist” and a “racist”. She selects one of her more innocuous utterances  — “Black people don’t have to be Democrats” — to represent the totality of her philosophy,  implying that she’s never said anything worse than that. And she takes the opportunity to renew her arrogant posing as being powerful enough to singlehandedly alter the political persuasion of all African-Americans and destroy the “Democrat Party”, as she persists in calling it.

She came under a lot of flak for beginning these tweets with LOL and HAHA, which somehow don’t quite seem like appropriate exclamations while bodies were being counted. But who cares about propriety when you’re Candace Owens. After many sessions of her Twitter tantrum, she finally got around to expressing a little sympathy for the murdered — though even then it was tempered with additional protestations of her blamelessness. In the meantime, she played both the racism card and the victim card — both of which she plays rather frequently, despite frequent claims that she abhors them.

As usual, it’s all about her. Notice how, in her ceaseless quest for oversimplification, she reduces the criticism of her to a matter of “blaming” her, as if people were saying she mesmerized the shooter and forced him to do her evil bidding. And, taking a cue from her infantile hero in the White House, she made the obligatory schoolyard threats.

Okay, Candy, get your own team of attorneys on alert, because here it comes.

Go ahead and sue me, and you will get more publicity than you ever bargained for, and not of the type you’d prefer.

Loony gunmen can be keyed into action by any number of things. And that evidently includes loony and hateful rhetoric from loony and hateful ideologues. The only question is their degree of culpability. Would the Christchurch terrorist still have gone on his shooting rampage if he hadn’t been egged on by right-wing media figures? We’ll never know. But what kind of person would be willing to take that chance? Answer: people like Tucker Carlson, Dana Loesch, Ben Shapiro and Candace Owens.