Introducing the Bad Meme of the Week

I hope you are staying healthy, productive, and in good spirits during this unprecedented crisis. And I certainly hope you are getting your medical information from medical professionals rather than politicians, pundits or preachers. If you’re like most people, your income stream has been disrupted by the pandemic, and you have more time on your hands; I hope you use it constructively — do something you’ve been wanting to do for a long time.

In my own case, the pandemic has ended up actually creating much more demands on my time, at least for the near future. During the next few weeks, I’m going to be even busier than usual, and so my writing schedule is going to suffer. Therefore, you may see longer spaces between blog posts for the next three or four months.  But I’ll keep plugging away at it as much as I can. Your patience is appreciated. (The next planned regular post, by the way, is going to be about the death penalty, but of course that’s always subject to change, especially given the wildly unpredictable eruptions of lunacy in the news these days.)

One thing that I should be able to keep on schedule is my rollout of a new feature on my Patreon page, a feature called Bad Meme Of The Week. For the most part, this feature will be available only on Patreon. But I am making an exception for the first installment and publishing it here, to give everyone an idea what the feature will be like. (There may be several more exceptions made during the next few weeks.)

The Bad Meme Of The Week is something I’ve been planning for some time, because I keep seeing so many really bad memes on social media. They often provide concrete, concise illustrations of the propaganda principles I’ve been discussing on these pages for, lo, these past 9 years.

The word meme in its original context means, according to Wikipedia:

an idea, behavior, or style that spreads by means of imitation from person to person within a culture—often with the aim of conveying a particular phenomenon, theme, or meaning represented by the meme.[4] A meme acts as a unit for carrying cultural ideas, symbols, or practices, that can be transmitted from one mind to another through writing, speech, gestures, rituals, or other imitable phenomena with a mimicked theme.

An example of a meme in this original sense is the peace symbol or the expression “read my lips”. But these days, when people say “meme” they’re referring specifically to Internet memes. And that’s what we’re going to be examining in this endless series.

Bear in mind that these choices won’t necessarily be particularly timely — at least not in terms of the 24-hour news/ outrage cycle we’ve come to accept as the norm. Calling something the Bad Meme Of The Week doesn’t mean that it only started appearing in that week; it just happens to be the week in which it was selected to be honored with our dubious award.

Let’s get to the first one, then. 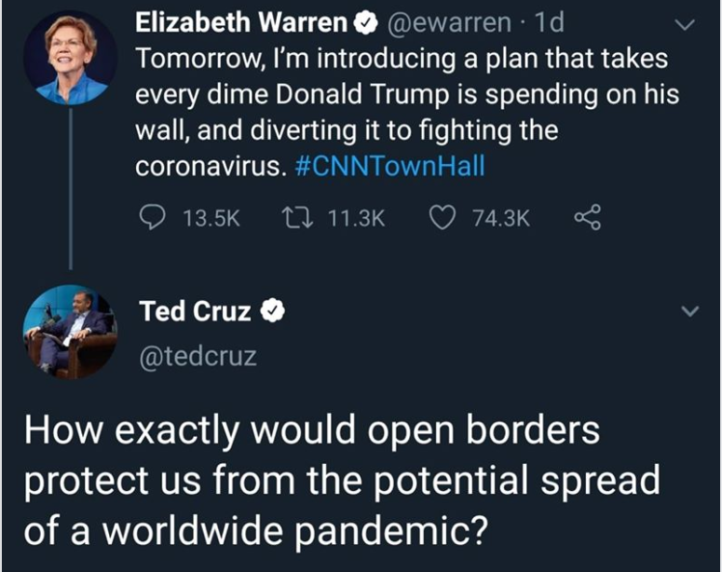 It’s only fitting that we should kick off with our old friend, the fastidiously bootlicking Ted Cruz, a climate science denier who has pushed a myth of a warming “pause” (among many other untruths), compared himself to Galileo for being anti-science (while revealing that he has no clue what Galileo’s actual achievements were) and declared that the Space Force is needed to protect us against “space pirates”. What better qualified person to get a handle on the import of Sen. Warren’s comments and plans?

In case you didn’t notice, Warren said absolutely nothing in her tweet about “open borders” nor did she even hint at any such.  She did make it very clear that she is in opposition to “the wall”. And it is very typical of Cruz’s breed of spin to equate opposition to the wall with “open borders”.  Evidently, he doesn’t realize that the U.S. has never had a border wall, but has not had “open borders” in a century or so. Somehow, he just flushes all of that history down the tubes whenever anyone speaks up about wasting billions of dollars on a wall.

In addition to conflating common-sense opposition to a wall with advocacy for “open borders”, he conflates travel with immigration. While the former is certainly required at some point for the latter, they are two very separate things. There is no reason why temporary restrictions on travel because of a pandemic should entail long-term restrictions on immigration because of… well, whatever concerns the anti-immigration crowd supposedly have.

Which brings us to the main reason his comment is so odious: it’s a dog whistle to white nationalists, who are using (justified) concern about the virus being spread by travel to suggest that some particular nationalities or ethnic groups are de facto disease carriers.(Yes, Cruz is Canadian by birth and Cuban by extraction, but that hasn’t prevented him from implicitly supporting white nationalist policies, even if he condemns them out of one side of his mouth.) While it’s true that traveling between the U.S. and Latin America is not a good idea right now, Mexicans are no more likely to infect Americans than vice versa — indeed, the Mexican government has done its part to contain the virus by banning travel from the U.S.

In short, Cruz’s reply to Warren was dumb, ignorant and stupid. And, accordingly, quite popular with his fans. Enough so to make it a Bad Meme Of The Week.