San Francisco, Circumcision, and the Endless Quest for “Liberal Intolerance” 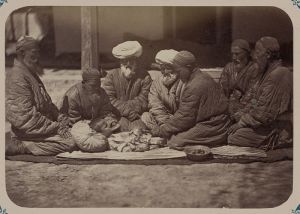 To some people, it’s of the utmost importance to engage in a tireless quixotic quest to locate “liberal intolerance”. These people generally style themselves as “conservatives”, though in fact they’re generally right-wing radicals. And there’s nothing more important to a right-wing radical than attacking “liberals”, however that term is – or much more commonly, is not – defined. (One of these days, I promise, we’ll take a good look at those much-abused terms “liberal” and conservative”, which are almost never used properly anymore, and which I almost always bracket in quotation marks, and for very good reason.) Many of them literally live for it. Since “liberal”, in the true sense of the word, is more or less synonymous with tolerant, “liberal intolerance” is a self-canceling phrase, rather like “conservative movement”. Therefore, it has become a chimera of choice among such“conservatives”.

Recently the Mercatus Center, a very influential right-wing think tank (founded and funded by the billionaire Koch Bros., who have been quietly but steadily buying out democracy for several years) released a laughable “study” showing that “liberal” states (California, New York, New Jersey) enjoy less freedom than “conservative” states. Essentially, the rule of thumb they followed is the fewer laws, the more freedom. They don’t seem to consider the possibility that the Big Apple, with some 8,000,000 inhabitants crammed onto a compact sliver of soil, might actually need more laws than Lamont, Wyoming with its population of 3. Furthermore, if you take a glance at the graph of the factors they considered and how they were weighted (yes, they were actually so inept as to publicize this information), you’ll note that financial matters constitute TWENTY-FIVE PERCENT of what they regard as crucial. Guns, of course figure significantly into the mix, but nowhere is there a mention of reproductive regulation, which almost all right-wingers are very gung ho about. Just goes to show that you really can prove black is white, provided you have no scruples about cooking the books.

It’s only natural, then, that such “conservatives” should salivatingly turn their gaze toward the librul Gomorrah called San Francisco, which has always been a supreme melting pot of all kinds of lifestyles, and therefore has always had a reputation for tolerance. (I speak with some authority on this topic, having lived more than 15 years of my own life as a San Franciscan.) And oh yeah, San Francisco sometimes passes certain laws, you see; and according to right-wing logic, a law aimed at curbing intolerance is the ultimate act of intolerance.

Recently, rumor has it that the City By The Bay played into their hands by banning circumcision. How dare those effete elites decree that we can’t carve up the wee-wees of our own babies? It’s been called a blatant infringement of “freedom of expression”, as if infant genitalia were artistic materials to be molded into expressive shapes to our liking.

Actually, San Francisco has not banned circumcision, at least not yet. What happened was that after a requisite number of signatures were collected, the proposed law was placed on the ballot, so in November, the electorate will decide whether or not to approve it. It’s the democratic process (also known as “liberal intolerance”) the way it was meant to work.

Fox “News” couldn’t wait for November, but promptly declared the measure to be a hitleresque attack on Jews. Never mind that the ban applies to all circumcisions, the great majority of which are performed by goyim. Never mind that a quarter of the city’s residents are Jewish, including no doubt a good many who signed the petition. Yes, it’s true that many Jews have decried the measure, but many others support it; just don’t expect to hear much about them, because they don’t fit the media narrative of librul intolerance so neatly. Incidentally, Fox’s righteous indignation doesn’t appear to extend so much to concern for Muslims, who are also habitual pecker-choppers.

You expect this kind of crap from Fox, but they weren’t alone. This was a golden opportunity for the powerful right-wing propaganda engine to do what it does best: manufacture outrage out of misinformation. It’s probably safe to say that there has been far more outrage expressed in the last few weeks over this one little law (which isn’t even a law, and probably never will be) than there has ever been expressed over circumcision itself, even though it’s been around for ages, and many have always found it objectionable.

Even more interesting, there has been far more outrage over female circumcision, which is already illegal not only in librul San Francisco, but everywhere else in The United States, as well as many other countries. And I’ve never heard of anyone complain of those laws infringing on freedom of expression.

This discrepancy is surprising for two reasons: there are far fewer female circumcisions than male, and females are usually considered of lesser worth than male, particularly in societies heavily dominated by religion. But that’s the rub: religion. Although female circumcision is often inspired by religious beliefs, it is typically not a religious rite per se. Its purpose is to permanently impair the ability of women to experience sexual pleasure, and to help keep the female head securely under the male boot.

Similarly, male circumcision has been the rage in America since Puritan times, when it caught on not for religious reasons (Jews were really a small minority then) but because it was believed to discourage boys from choking the chicken. (The Puritans were on the right track, but you’d really have to cut off the whole thing.) Still, while religion didn’t provide the inspiration, it provided the defense: anything good enough for Jesus is good enough for our children, so shuddup and pass the nails .

Religion and tradition are the twin pillars that have supported all kinds of practices including slavery and human sacrifice. These activities have been largely eliminated after many bold strokes of librul intolerance, in defiance of “conservatives” who demanded “I don’t need no stinkin’ guvmint limiting my freedom to do whatever I want to other people.”

No, no, I am not suggesting that circumcision is in a class with those things. The point is that while “conservatives” often seem to invoke religion and tradition to justify anything and everything, the truth is that absolutely NOTHING can be logically justified on such grounds alone; there are always other factors that need to be considered. Circumcision, for example, has long been believed to be hygienically beneficial, though the evidence is by no means conclusive. The people of San Francisco, or at least some of them, have considered certain other factors.

There is, for one thing, the inescapable fact that circumcision is quite painful. This can be mitigated somewhat, and many try to convince themselves that babies don’t feel the pain at all. But that’s royal technicolor bullshit. At any age, it hurts like hell to have something amputated from your body – whether it be a finger, an ear, or part of Mr. Winkie.

For some slice-ees, the experience is also highly traumatic. There is even evidence that circumcised males may be more prone to low self-esteem and depression. It clearly doesn’t have that kind of effect on everyone, but there are support groups with plenty of members (no pun intended) for circumcised adults, some of whom even undergo procedures to restore the loss.

You may not approve of what decision the San Francisco voters ultimately make. You have the right not to approve. But to brand the initiative itself as intolerance is truly the pinnacle of reactionary spin.