By now you’ve surely heard more than you ever, ever wanted to hear about the whole Duck Dynasty flap (if you live in The United States). But chances are you haven’t heard anything at all about the important lessons to be learned from it. So here are a few observations for your consideration.

1. Disapproval is NOT censorship.

It’s become an automatic response of anyone on the receiving end of a backlash for expressing bigotry or general idiocy to say, “Hey, you’re trying to censor me”. Or “you’re trying to suppress my First Amendment rights.”  Poppycock, horsefeathers, balderdash and codswallop.

Duck Dynasty’s head mallard, Phil Robertson, expressed his mind (such as it is) and nobody tried to stop him. GLAAD and A&E expressed their disapproval. All were perfectly within their constitutional rights.  So was the network’s decision to suspend Robertson temporarily while reassessing its relationship with him.

The constitutional protection of the right to free speech was never intended as a shield against fallout if your speech is cloddish. If you call a guy a rotten sonofabitch and say his mother is a whore, he just might punch you in the nose. It’s not censorship. It’s not unconstitutional. It’s not intolerance. It’s Newton’s third law.

Let’s face it, we live in the Golden Age of the tempest in the teapot, an age in which any dumb joke or offhand whimsical remark triggers a hoopla of seismic proportions. The formerly innocuous neologistic verb tweet has become a synonym for “invite an avalanche of distortion and negative publicity”.

So did people overreact to Robertson’s crass self-righteousness? Maybe. After all, there was far less outcry to his comments in the same interview to the effect that he thought African-Americans had been perfectly content with their social status in the pre-civil rights South, and that a non-Christian outlook leads to Nazism and genocide.  (Hey, nobody ever accused him of being a history scholar.) And his remarks about homosexuality in the interview were really rather tame in comparison to his past sage utterances on the topic that also flew mostly under the radar.

Phil and his family claim to be Christian, but Phil’s lies about an entire community fly in the face of what true Christians believe. He clearly knows nothing about gay people or the majority of Louisianans – and Americans – who support legal recognition for loving and committed gay and lesbian couples. Phil’s decision to push vile and extreme stereotypes is a stain on A&E and his sponsors who now need to reexamine their ties to someone with such public disdain for LGBT people and families.

As you can see, it’s much more elegant and civil than Robertson’s. As is the statement issued by A&E:

We are extremely disappointed to have read Phil Robertson’s comments in GQ, which are based on his own personal beliefs and are not reflected in the series ‘Duck Dynasty.’ His personal views in no way reflect those of A+E Networks, who have always been strong supporters and champions of the LGBT community.

And it’s certainly far more elegant and civil than the over-the-top reaction from Duck-lings, as typified by Fox “News”:

A&E is apparently run by a bunch of anti-Christian, bigots. Duck Dynasty worships God. A&E worships GLAAD. If Phil had been twerking with a duck the network probably would’ve given him a contract extension. But because he espoused beliefs held by many Christians, he’s been silenced. Perhaps A&E could provide the nation with a list of what they believe is politically correct speech.  Maybe they could tell us what Americans can say, think and do. Should the U.S. Constitution be amended to prevent Americans from holding personal beliefs that others might not agree with?… It’s not about capitalism. It’s about driving an agenda and shoving it down the throats of the American public. And Hollywood is beholden to an agenda that is anti-Christian and anti-family.

Good grief. They forgot to mention the  “Communist conspiracy to sap and impurify all of our precious bodily fluids”.

You’ll notice that GLAAD and A&E (and most other people who objected to Robertson’s clueless crackerdom) limited their remarks to complaints about specific comments by a specific individual. They didn’t attack, insult, accuse or belittle him or anyone else. Not the rest of his family. Not duck hunters in general. Not Louisianans. Not guys who look like ZZ Top posing as GI Joe. And most certainly not Christians. But…

Have you noticed that people seem to find it increasingly difficult to view an incident as merely an incident? Everything has to be part of a trend, a movement, a plot, a conspiracy. Of course, the media do all they can to feed this attitude, and we could have an interesting chicken-and-egg debate about whether it’s more a matter of the media dictating or catering to the mindset; but in any case it’s pretty hard to deny that the mindset does exist.

In this instance, the overreaction to the overreaction tended to follow what has become a very popular narrative: that rejection of intolerance is more intolerant than intolerance itself. There was an explosion of rants about the oppressiveness of “political correctness”, whatever that is, on the part of the “Hollywood elites”. And always, such narratives absolutely and inevitably MUST lead to a scathing indictment of them librulz. This, the official spin goes, was another shining example of that ever-sought chimera, liberal intolerance. And oh yeah, it was a “war on Christian values”, as if all Christians were homophobic. (Quick, what did Jesus have to say about homosexuality?) But in fact some of them are actually too busy trying to improve the world to go around proclaiming that God is going to punish people for being the way He made them. And then there are the others…

They want it so much that they’re more than willing to pick a fight as often as possible in order to justify the paranoia.  One group they love to pick a fight with is gays. (See previous posts on Gay Activism and the Christian Persecution Complex: “Playing Chikin“, “A Tale of Two Legal Judgments” and “The Kirk Cameron/ Anita Bryant Delusion“.) But they’ll settle for other groups as well.

Not long before the GQ story broke, another Internet narrative began circulating about Phil Robertson, to the effect that Duck Dynasty producers had asked him not to pray on the show, at the insistence of “atheists and liberals” — a claim which turns out to be quite unfounded . In another interview, he specifically mentioned that they frowned on his ending prayers with “in Jesus’ name”,  possibly because it could offend Muslims. There’s no substantiation of this claim either, nor any reason to believe that in fact Muslims would be offended by such a thing.

It’s also interesting to note that this controversy erupted at time of year when the Christian persecution complex was already operating at full throttle. Every winter, one of the most inane of narratives, the “war on Christmas“, is as predictably conspicuous as eggnog and candy canes. Whenever someone says “happy holidays” or anything else except “Merry Christmas”, it’s taken as a sure sign that they’re out to eradicate the holiday altogether and ship all Christians off to a gulag in Siberia.

At about the same time the Duck Dynasty brouhaha was brewing, a woman in Phoenix who was collecting donations for The Salvation Army (which, lest we forget, is itself a Christian organization) was allegedly assaulted for expressing good will in an unauthorized fashion to a Good Christian. Is that censorship? Persecution? Political correctness? We don’t know, because The Indignant Guardians Of Liberty And Tolerance tend to become eerily silent about occurrences of this type. But maybe if Christians really are at war with the rest of the world, it’s because they’ve fired the first 5000 shots.

5. Many Christians try to duck responsibility for their own beliefs.

As we discussed in the previous post, they try to blame God for their bigoted and unenlightened doctrines, and quote cherry-picked biblical passages to buttress those beliefs. But this doesn’t work because (1) it’s very difficult to know exactly what the Bible says or intends; (2) the Bible often seems to contradict itself, and (3) you can find something in the Bible to justify anything you choose to believe.

One scriptural snippet the gay-bashing fundamentalists love to dredge up is Leviticus 18:22. What they fail to mention, however, is that the same book also states some other laws issued by the Almighty that most Christians wouldn’t want to live by. (At least let’s hope not.) And the Bible devotes even more wordage instructing you to sell your daughters into slavery, for instance. It’s the believers themselves who pick some biblical passages to live by and ignore others. And if there is a Guy Upstairs, he’s probably getting mighty annoyed at taking the rap for so long. 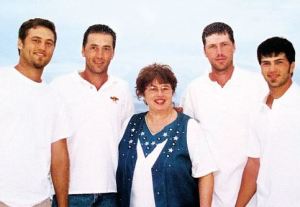 The above photo depicts the Robertson family in its pre-DD days. Chances are they wouldn’t have created such a media buzz if they’d continued grooming themselves like this. But fortunately for them, they underwent a savvy PR makeover, relinquishing an image that suggested the stereotype of the Homogenized Yuppie for one that suggests the stereotype of the Inbred Goober. And subsequently, their popularity has taken off like a skeet.

Americans have a fondness for, an infatuation for, an obsession with, the severely unsophisticated personality — not just the non-intellectual, but the anti-intellectual. Most people (hopefully) recognize that pop culture icons like Homer Simpson and Archie Bunker are meant to be satirical rather than exemplary. But there are real-life characters who are almost equally satirical, and they often end up in positions of power and influence: e.g., Sarah Palin, George W. Bush, and Dan Quayle. And did we mention Sarah Palin?

Phil Robertson was hired to be a buffoon, so nobody should be surprised by his comments in GQ. Or comments like this:

Look, you wait ’til they (women) get to be 20 years old, the only picking that’s going to take place is your pocket. You got to marry these girls when they are about 15 or 16. They’ll pick your ducks.

Really, Christians? You feel morally superior for standing behind someone like this?

It’s also no surprise that he was reinstated on the Arts and Entertainment network, though he is neither very artful nor, for may of us, very entertaining. His supporters rallied to his defense, and he probably picked up quite a few more troops along the way — which is one reason why it’s probably not a good idea to make such a fuss about his comments in the first place. In fact, it wouldn’t be a big surprise to learn that the whole thing was a publicity stunt cooked up by the Robertsons and the network.

But the real question is, why do so many people even give a shit at all about what someone like Phil says? That they do surely reveals something significant about contemporary American “culture” — something that, like the Robertson clan decked out in its waterfowl-slaughtering regalia, ain’t very pretty.