Creationism, Design and the Watchmaker Fallacy 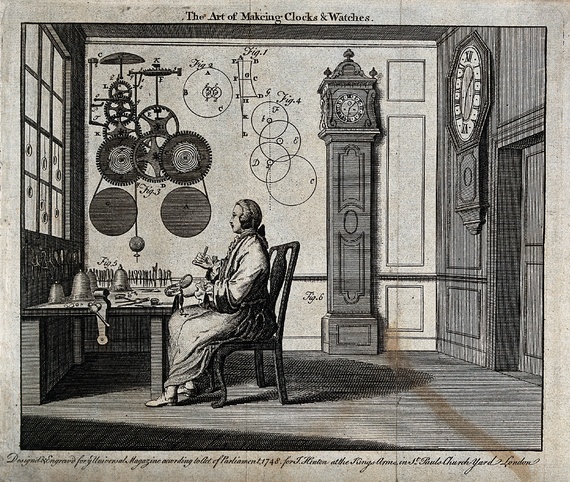 In 1802, British theologian William Paley imagined himself finding a watch on the ground while he was out for a stroll. That imaginary timepiece, though there was nothing intrinsically valuable or distinctive about it, ended up being probably the most celebrated and notorious ticker in the history of theology and philosophy. Because Paley conjured it up to make a point about what he perceived as the inescapable origin of the universe:

In crossing a heath, suppose I pitched my foot against a stone, and were asked how the stone came to be there; I might possibly answer, that, for anything I knew to the contrary, it had lain there forever: nor would it perhaps be very easy to show the absurdity of this answer. But suppose I had found a watch upon the ground, and it should be inquired how the watch happened to be in that place; I should hardly think of the answer I had before given, that for anything I knew, the watch might have always been there. … There must have existed, at some time, and at some place or other, an artificer or artificers, who formed [the watch] for the purpose which we find it actually to answer; who comprehended its construction, and designed its use … Every indication of contrivance, every manifestation of design, which existed in the watch, exists in the works of nature; with the difference, on the side of nature, of being greater or more, and that in a degree which exceeds all computation.

It’s hard to believe that an educated and intelligent individual like Paley would ever even fall for, much less contrive, such a silly and self-refuting argument. But it has shown the kind of staying power that all bad ideas have. Even today, it’s often summoned out of its crypt to defend creationism — which its promoters now believe they can sneak under the radar disguised as “intelligent design”.

The “argument from design” has been making the rounds for centuries. (Robert Frost put a sinister and ironic twist on it in his sonnet titled “Design”.) Basically, the argument from design is the belief that the universe is so complex and purposeful that it could not have developed without being guided by a supreme power. This seems derived from the premise that a supreme being would be able to design a universe more complex and purposeful than any universe that could develop by “chance” (if you want to think of it in those terms).

The latter is in a sense a reasonable conclusion; assuming that there really is a supreme being, then by definition it would be able to perform feats that nothing else can — including “chance”. But even if we grant this to be true, it does not follow that the particular universe we live in would require a designer. We simply have no way of confirming that assumption.

The argument from design holds that because a certain thing performs a certain function, it must have been created purposefully to perform that function. Which is akin to saying that since horses have been used for racing, then there must be a supreme being who’s a racing fan. Or did He actually create them for pulling carts and indulging in kinky sex? The creationists are simply begging the question here; they assume that complexity and purpose can exist only as the result of willful intent as opposed to trial and error, and then they conclude that therefore the existence of complexity and purpose must prove the existence of willful intent.

A related argument practiced by creationists is first cause. The reasoning is that since everything in the universe has a cause, then we can trace all the causes back to a First Cause, i.e., God. But the very notion is a self-contradiction: on the one hand, everything has a cause, and yet on the other hand, there is something that presumably doesn’t. The concept of a first cause also posits a naively and drastically oversimplified model of how the universe functions — a linear construct in which A causes B and B causes C and so on. But the real universe does not operate in a straight line; it operates in an unfathomably complex web of mutual influence. To single out a “first cause” is not only impossible but pointless.

The problem with the claim that “God created the universe” isn’t that it’s inaccurate, but that it’s downright meaningless. As we mentioned before, “God” is term subject to a broad range of definition. And how exactly would the universe be “created”, anyway? Many people insist that the universe could not have just developed out of nothing, so it must have been created, somehow, out of… well, nothing. By a Creator who came from… well, nothing.

As for Paley’s notorious watch metaphor, it’s a classic false equivalence. He is juxtaposing a thing that we know to be created with a thing that we don’t know to be created and concluding that because it’s possible to find characteristics they have in common, then both must be created. What he’s overlooking is that their differences are much more significant than their similarities — a problem he even stumped his own toe on by comparing the watch to a rock.

The essential property that is intended to make the analogy work is the property of irreducibility. Remove one of the tiny gears (each of which was specially crafted for a specific, identifiable purpose) from a watch and you significantly impair or terminate its functioning. That certainly is a strong indication that the watch was designed and manufactured rather than “just happened”.

The universe, however, is quite another matter. On every level from the most microcosmic to the most macrocosmic, the universe is in an unending state of flux, with elements constantly growing old, dying out, being replaced, or just being lost altogether. People lose teeth, hair and organs and life goes on. Indeed, not only do we have wisdom teeth, tonsils and appendices removed, but these organs appear to be useless at best. Countless entire species have become extinct. Stars go nova, obliterating everything in the neighborhood.

While each of these events might make a difference at some level, the universe takes a licking and keeps on ticking. Can the same be said for Paley’s watch?

Ultimately, if you choose to believe in creationism, you must do so on the basis of faith alone. There is no line of reasoning that will make it more logical than any alternative(s). This need not be a problem as long as you keep religion in its proper sphere of cognition. It is when we try to substitute dogma for science that we run into problems of cosmic proportions.

It may be okay to say that “God created the universe”, particularly since nobody will even know what that means. But that does not mean it’s okay to teach kids that the earth is 6000 years old. It isn’t, and it isn’t.