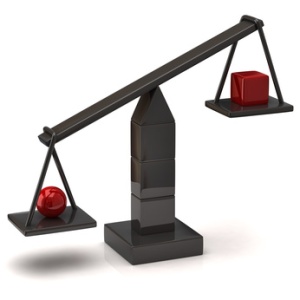 In a video making the rounds on the Internet not long ago,  an interviewer asks several science-minded individuals why they believe in evolution and not creationism, and coaxes them into saying that it is essentially because science is based on observable evidence, while religion is based on pure belief.  He then innocently observes that, hey, evolutionists discuss events that supposedly happened millions of years ago, and you can’t witness them since they were so far in the past; so why is that better than believing things you can’t see that supposedly happened thousands of years ago, or that happen on some spiritual plane of existence? By suggesting that putting faith in physical evidence is as arbitrary as putting faith in dogma,  he was slyly invoking false equivalence, the eighth in our series of propaganda tools.

A false equivalence, as the name suggests, is comparing or equating things that are not appropriately similar. (“The First Amendment applies to the Internet even though it hadn’t been invented when the Constitution was written; so the Second Amendment gives me the right to own an AK-47.”) This tactic is often labeled false analogy, which theoretically could be classified as something different: a false equivalence is saying that two related but dissimilar things are essentially the same, while a false analogy is saying that two unrelated things are comparable (“You cheat at solitaire, so you have no right to criticize me for being a racist.”). But in practice, the distinction is often so slight and so difficult to pinpoint that it’s really no false equivalence to just consider them interchangeable.

Quite often, the F.E. seems to be a valid analogy at first blush, but if you examine it more closely, you see that the subtle distinctions are actually quite substantial. It isn’t necessarily that the differences are more numerous than the similarities, but they are more significant. In the photo above, the two objects have certain things in common: e.g., they are both regular geometric solids, they are both shiny, they are both smooth, and they are both red. But clearly they are not the same.  One is a cube and one is a sphere. One is heavier than the other. It may be that they are different sizes, or made of different materials,  or that the cube is hollow. In any case, the differences literally outweigh the similarities.

Recently when discussing vegetarianism, I made an allusion to my 40 years of personal experience with the topic, and someone remarked that I might as well cite 40 years of faith healing or psychic work as proof that those activities are valid.  The point was that all of them involve anecdotal evidence; but the anecdotal evidence is being used in very different ways. And it’s a false equivalence for at least three reasons.

First, as I perhaps should have made more clear, my “experience” is not limited to my own vegetarianism, but to my having read about, met and talked to, literally hundreds of other vegetarians, and to having done a great deal of research on the topic.  Second, it’s a comparison between the purely hypothetical and intangible — i.e., psychic powers and faith healing — and the tangible and demonstrable; diet definitely does have an effect on health, and there’s ample evidence that a vegetarian diet can have a positive effect. Third and most important, unlike the psychic and the faith healer, I’ve never cited my personal experience/research as “proof” of anything; on the contrary, I suggest that it’s reason to doubt conventional wisdom — i.e., that consuming meat is necessary for good health. (Which is to say that when you have a premise that doing thing A invariably produces result B, yet you have hundreds of random individuals who’ve been doing A for years with results consistently the opposite of B, it might be prudent to examine your premise a little more closely.)

It’s very easy to drift into those murky waters, because we all like to make comparisons — they help illustrate, clarify and amplify. But no two things are exactly alike; so it can be a bit tricky to determine where to draw the line between appropriate and inappropriate analogy. Sometimes, then, the false equivalence is a sincere logical fallacy rather than an attempt to deceive. In many cases, however, the analogist steps blatantly over the line; even when not doing so deliberately, he/ she does so as part of an overall inclination to distort in order to attack or defend a particular position.

The interviewer in the video may or may not have been intentionally dissembling, but he definitely was operating under a false premise: namely, that religious authorities are at least as qualified to speak about science as are scientific authorities. This stems from the great fundamentalist fallacy that religious texts should be interpreted as literally as scientific texts. But in fact, religion and science are two totally different spheres of cognition — two different languages, if you will. Those who understand this can be both scientific and religious if they so choose. Those who don’t are likely either to condemn religion as being unscientific (its actually nonscientific) or condemn science as being “blasphemous”.

False equivalence is often invoked in discussions of religion. One popular motif is to maintain that the absence of faith is itself a sort of faith. A few years ago, there was even a movement among the Christian Right to have “secular humanism” officially declared a religion, so that it would be a violation of the principle of the separation of church and state to enact secularist policies such as prohibiting school-enforced prayer. Cute.

Of course, this was a political maneuver as much as a religious one, and you’ll certainly encounter plenty of false equivalence in discussions about politics and current events. Turn on the talking heads and before a quarter of an hour has elapsed,  chances are you will have heard at least one faulty comparison.

One of the most popular manifestations is the “both sides do it” narrative,  which sometimes manifests as the tu quoque — Latin for “you too”, a fancy way of saying that it takes one to know one.  As you might imagine, I get that one thrown at me quite a bit. (“You’re a propagandist yourself”. “You’re promoting your own causes.” “You’re using straw men and cherry picking while accusing other people of doing the same.” Etc, etc, etc. Which is a clear indication that someone either is distorting my words or is confused about the concept in question.)  Sometimes a tu quoque is a valid point; quite often, it’s just a knee-jerk attack from someone who feels that he/ she absolutely must attack, but really has nothing to say.

The “both sides do it” is my favorite specimen of false equivalence because it offers so many possible applications. Accordingly, I’ll be devoting a separate discussion to it in the near future.

No examination of false equivalence is complete without some mention of the very popular “reductio ad Hitlerum” — the tendency to summon up the specter of Der Fuhrer to stand beside anyone you don’t like.  If I had a dime for every time I’ve heard this one, I’d be as powerful as Hitler.

The fact is, nobody is really like Hitler. That’s what makes him such an effective illustration but such an ineffective and inappropriate benchmark. Sometimes someone may have something in common with Hitler in a very small way (you may know lots of short, dark-haired former painters who speak German), but never to the extent that fiery rhetoricians suggest. A Hitler analogy is almost always out of line.

That being said, we also should acknowledge that the over-sensitization to Hitler analogies has created its own problems. Sometimes you might hear an exchange like this:

Mr. Smith: You’re very firm in your beliefs, but that isn’t always a good thing. The Nazis were firm in their beliefs, too.

Mr. Jones: There you go, comparing us to Nazis and comparing me to Hitler.