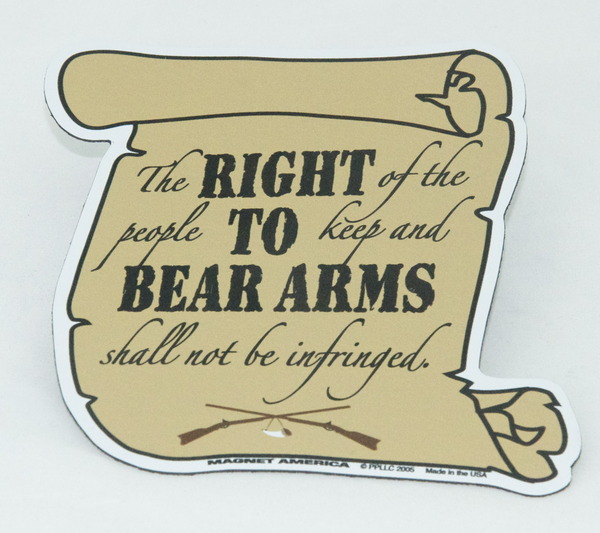 Let’s be clear: Americans have a right to own guns. But it’s not a constitutional right. And it’s not a “God-given” right. It’s a right conferred by the rulings of a “conservative” Supreme Court, in a grotesquely distorted reading of the Second Amendment.

But in the interests of accuracy and satisfying curiosity, let’s consider the Second Amendment in more detail. We’ve touched on this topic in a previous discussion, but it was hardly exhaustive. In fact, it was quite cursory, and was designed to show that the amendment is a semantic mess that, at the very least, casts serious doubts on the gun culture’s claims of a constitutional right to be armed. And as long as there is one scintilla of doubt, then you cannot say (as many do) that there is an absolute right enshrined in the Constitution to tote a hogleg.

The gun culture tries to dance around the actual meaning of the Second Amendment in several ways. First of all, it simply ignores the first part of the sentence, the inconvenient explanation for its existence:

A well-regulated militia, being necessary to the security of a free state…

And instead, gunsters just cut to the part they actually like…

…the right of the people to keep and bear arms, shall not be infringed.

You seriously will hear many of them simply quote that second half as representing the entire Second Amendment (as on that handy-dandy magnetic sign pictured above), perhaps followed by a haughty “what part of that don’t you understand?”

How about the part they omitted? The part which, as we mentioned before, could be construed as the actual subject of the sentence. The part which, whether one reads it as the subject or not, is placed at the beginning and is clearly crucial to understanding the Amendment’s meaning and purpose.

Even when they acknowledge this elephant in the living room, the gun fanatics try to diminish its importance. They often try to dismiss the opening as merely a “justification clause” while the second half is the actual “rights clause”; or alternatively, “prefatory clause”, and “operative clause”. Nice words, but they don’t change anything: the beginning clause still expresses the purpose and reason for the amendment being drafted in the first place: i.e., to ensure a “well-regulated militia”. The gun culture’s conclusion that “gun rights” were not meant to be limited to this purpose alone is based on clues extraneous to the amendment itself, and indeed extraneous to the Constitution. (Incidentally, in strict grammarian usage, the two phrases referred to are not really “clauses”; but since that’s the label they’re commonly given, we won’t be sticklers on this point for the time being.)

Suppose you opened up a cookbook and found a passage like this:

A well-made fruitcake being necessary for a traditional Christmas celebration, you should make certain to have a supply of citron on hand.

Another tactic the gun culture (and right-wing extremists in general) often employ is playing the “original intent” card; if the Constitution doesn’t say what they want it to, they try to discern what the framers really meant. They do this in part by just playing psychic, though they try to buttress their claims by scratching through an endless supply of documents for “historical context”.

Now certainly historical context is, up to a point, useful and even vital. It’s important, for instance, to understand what words like “militia” and “arms” meant to the Framers who used them. But the “original intent” crowd often turn historical context into a bottomless pit by mining all manner of documents for clues that are really tangential to the point under consideration. I recently had someone try to argue with me, for instance, that the Civil War was really not about slavery because her great-grandfather fought for the Confederacy, and by god he had other motives, and if I would just read all the letters and other papers left by the other Southern peasants, I’d see that they had other reasons for fighting. No doubt. But they weren’t exactly the ones who made the decision to declare war, were they? The ones who did make the decision were quite unequivocal about their motive.

An excellent illustration of how the gun culture utilizes this tactic can be found in what is surely the ultimate compendium of gun culture propaganda: Gun Facts , which is intended to address every “myth” that has been, is being, or ever will be, perpetrated by the “gun control” advocates. It covers gun culture talking points of every possible breed, from mass shootings, to children and guns, to gun laws, to microstamping to concealed carry — and of course to the Second Amendment and court rulings as well. A sleek PDF of Gun Facts can be downloaded for free; and oh by the way while you’re at it, you also can purchase another book heavily marketed within its pages that betrays the real NRA agenda: drawing a bead on “liberals”.

Incidentally, there is a simple but quite reliable litmus test for gauging the probable reliability of any such source of gun “facts”; just check to see whether it places obeisant faith in the absurd “statistic” of 2.5 million defensive gun uses per annum. If it does, there’s an excellent chance it will be just as sloppy about the rest of its “facts”. Gun Facts does, and is. (It also fails another telling litmus test, parroting the claim that Nazi Germany “established gun control” in 1938.) Furthermore, in another section, GunFacts states that firearms are used to prevent 400,000 crimes per day — which would be a whopping 146 million annual DGUs! How can this publication expect to shoot down “gun control propaganda” when it goes gunning against itself?

The author also mentions that during the deliberations on the Second Amendment, one senator proposed inserting the words “for the common defense”, but this suggestion was voted down. Evidently, he concludes that rejecting that wording also means a rejection of the concept. (In fact, “for the common defense” is, for one thing, redundant when you already have “well-regulated militia”).  And note the logic here: the absence of a phrase about the common defense means the whole concept is null and void, whereas the absence of a phrase about individual defense means this is clearly what the founders had in mind.

Not content with having shot himself in both feet, the author then turns around and shoots himself in the ass as well by quoting the first draft of the Second Amendment:

The right of the people to keep and bear arms shall not be infringed; a well armed and well regulated militia being the best security of a free country; but no person religiously scrupulous of bearing arms shall be compelled to render military service in person.

Talk about an inconvenient clause. Why would there be a provision for conscientious objectors if the purpose of the amendment is to guarantee individuals the right to go deer hunting or gun down illegal immigrants invading their homes? Yes, this clause was eventually eliminated (after being retained in the second draft). And evidently, the Gun Facts author believes, in Orwellian fashion, erasing the text of it erases it from ever having existed at all. But if you’re talking about original intent, it’s hard to argue that the Framers had private gun ownership in mind when they talked about military service and religious objections. It’s very clear that they were really talking about a well-regulated militia, whatever that means.

And just what that means is something we’ll be looking at in the next installment.