The Biggest Lie About the Civil War 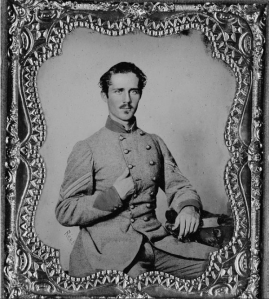 Since 2011 marks the 150th anniversary of the outbreak of The Civil War, perhaps it would be improper to allow the year to expire without commenting on a popular misconception about the bloodiest conflict in American history. Did we say misconception? Nay, it’s an outright lie, spread by proponents of the Confederate cause.

The Big Lie: “It Wasn’t Really About Slavery.”

Advocating slavery would not be a very popular course at present; and it wasn’t even universally popular at the time. Consequently, it often has been camouflaged by other supposed motives. The right to secede. (For what purpose?) Government  policy. (Pertaining to what?) Economic factors. (An economy powered by what?) States’ rights. (To do what?) Every supposed impetus you could name, even if legitimate, could be directly linked to slavery.

“States’ rights” is an especially popular excuse these days; one reason is that it aligns the Neo-Confederates with the Neo-Conservatives, both of whom are concentrated below the Mason-Dixon line.  But both actually support states’ rights only when convenient. For an example of how quickly the Neocons can be prompted to do an about-face on states’ rights, see Bush vs. Gore. For an example of how easily the Confederates could be prompted to do so, see how pissed they became at Northern states who opted not to enforce the Fugitive Slave Act.

Obstinate adherence to an ideology always requires a certain willingness to ignore facts. But the Dixienauts also seem quite willing, when it suits their purposes, to ignore the words of their own beloved iconic leaders: Confederate “President” Jefferson Davis and “Vice-President” Alexander Stephens.

In January 1861, then-Senator Davis delivered a farewell speech to the U.S. Senate in which he declared why his state of Mississippi was to become a Union dropout:

She has heard proclaimed the theory that all men are created free and equal, and this has made the basis of an attack upon her social institutions.

Stephens was even more explicit. In what was to become known as the Cornerstone Speech, delivered in March of 1861, he declared:

This (equality) was the immediate cause of the late rupture and present revolution.

Our new government is founded upon exactly the opposite idea; its foundations are laid, its corner- stone rests, upon the great truth that the negro is not equal to the white man; that slavery subordination to the superior race is his natural and normal condition.

But my favorite part of his speech is this:

This, our new government, is the first, in the history of the world, based upon this great physical, philosophical, and moral truth. This truth has been slow in the process of its development, like all other truths in the various departments of science…Those at the North, who still cling to these errors, with a zeal above knowledge, we justly denominate fanatics. All fanaticism springs from an aberration of the mind from a defect in reasoning. It is a species of insanity. One of the most striking characteristics of insanity, in many instances, is forming correct conclusions from fancied or erroneous premises; so with the anti-slavery fanatics.

A Dose of Sanity

For an example of what Stephens considered sane behavior, see page 282 of Malcolm Gladwell’s 2008 book Outliers, in which he describes a standard treatment, known as “Derby’s dose”, administered to runaway slaves by one certain slave owner:

The runaway would be beaten, and salt pickle, lime juice, and bird pepper would be rubbed into his or her open wounds. Another slave would defecate into the mouth of the miscreant, who would then be gagged for four to five hours.

Yes, surely this was the slave’s “natural and normal condition”.

The Confederate mentality is still very much with us. It never left. You can’t really expect it to when history has so whitewashed what the Confederacy really stood for, and posterity has been so willing to honor the memory of those who died in battle regardless of the values they represented. You may recall that President Ronald Reagan caused a stir by paying tribute to Nazi soldiers, apparently not even considering the implications of his actions.

Walk through Gettysburg and you’ll see monuments to Confederate soldiers right there with monuments to Federal troops, as if their causes were equally noble. They weren’t. One side fought to preserve the Union, the other to rip it apart in order to preserve the institution of slavery. No amount of “politically incorrect” revisionism can change that.