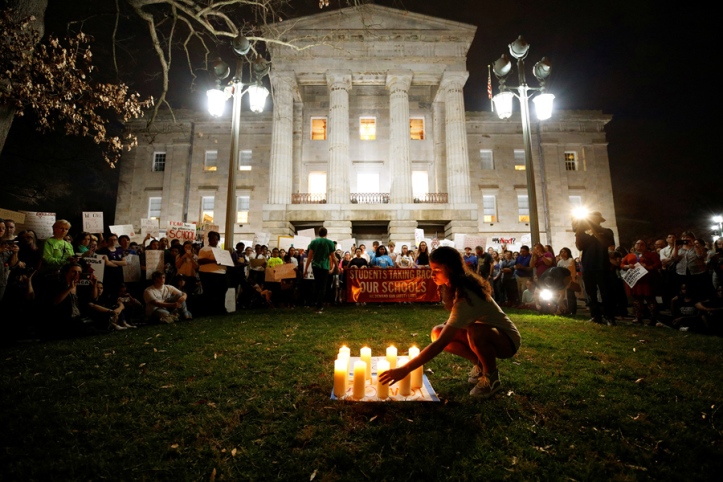 As we have seen in the previous installments, there is nothing in the Second Amendment that explicitly guarantees the right of an individual citizen to own firearms. But while arguing to the contrary, gunsters also hedge their bets by claiming that the amendment was not really meant to grant such a right but to reaffirm it; that, since many people owned guns in Revolutionary times, they obviously had a right to do so, and therefore such a right is still in effect today.  It was and is, so they say, a “pre-existing” or “innate” right. Many times they will even refer to it as a “God-given” right, as if that celebrated stone tablet had had a flip side on which was engraved, “Thou shalt be armed to the teeth with weapons to be invented millennia hence”.

There are really two separate but related issues here: tradition as precedent, and the presumed right of ownership in general.

By “tradition as precedent”, we mean the conviction that just because something has always been done or was done in the past, that makes it acceptable, preferable or even mandatory.  This tenet is the backbone of conservatism and even neoconservatism. And it’s absurd on the face of it. As Tevye so famously discovers in Fiddler on the Roof, there are times when faith in tradition severely butts its head against harsh reality.

Surely anyone can readily tick off a list of activities that most people consider undesirable, yet have a very long tradition: murder, theft, rape, child marriage, racism, slavery, violent conquest, genocide and greed, to name just a few. Not only have all such actions been committed on an individual basis for countless ages, but most have been officially sanctioned by societies and governments at various times and in various places.  Indeed, it’s hard not to draw the conclusion that tradition, far from being ample justification for continuance of an action, is more likely to be an indication that an action should be curbed.

There is an old saying to the effect that your right to swing your fist ends where my nose begins. And quite often, one particular action that could be regarded as a right (or at least as permissible) under one set of circumstances could be justly prohibited in a different social context. If you only rode your motorcycle on deserted roads, it well might be that you would have a right to ride as fast as you wanted, without a helmet.  But if there is a chance that other motorists will be using that road, then it is incumbent upon you to consider the lifelong impact upon their lives that your unhelmeted, dumbassed death might occasion.

If you live in a cabin on an isolated mountaintop, then you might have every right to burn your trash and take target practice in your yard. If you live in the heart of Los Angeles, that’s another matter altogether. So even if we assume that Americans in the Eighteenth Century had a right to own guns, that wouldn’t mean that the same is true in today’s radically different world.

Reason and the evidence of history indicate that if people followed what is sometimes called The Golden Rule, we’d all be much happier and better off. But they don’t, and won’t. Which is why we have laws.

Of course, the existence of laws and governments results in an occasional clash between legal rights and what we perceive as innate (“God-given”) rights. Homosexuality, for instance, has very frequently and universally been the target of repressive regulation. And we’d normally assume that a family has a right to have as many children as it wishes. But the government of China, fearing catastrophic overpopulation, decided that there should be no more than one child per family (in most cases), which seems to be a violation of said right.

On the other hand, one could argue that such an innate right does not really exist in circumstances under which large families would pose a burden to society (bear in mind that “society” is just another name for “other people”).  Furthermore, it’s at least understandable if not justifiable that a couple in any country should be prohibited from having more children if they have been horribly abusive to the ones they already have.

In any case, whether it’s a matter of innate rights or legal rights, mere tradition alone is clearly not an adequate justification for any activity.

Nine-tenths of the law

But what about the right to own property in general? Surely in a free society you have a right to own your house, your land, your automobile, and — why not — your shooting implements, without any authorization from the government. Don’t you?

Actually, the same principle applies. Let’s not forget that for the vast majority of human history, there was a presumed innate right to own other human beings. It was not until fairly recently in our evolution that we collectively began to realize that slavery was not merely a swing of the fist, but a punch to the nose of human decency. And few people would maintain that a citizen has a right to own a nuclear warhead. Guns are designed for essentially the same purpose on a smaller scale.

It’s true that for much of America’s history there was a presumed right to own firearms — just as there was a presumed right to own slaves. But presumed right is not the same as innate or “God-given” right. Things were a bit different in the good old days. Guns were deemed essential for survival; many people depended on hunting for food, and faced the threat of hostile natives. Neither is the case now — just as it is no longer the case that forced labor is deemed necessary for agricultural production, or that people of African descent are regarded as less than human.

Most Americans no more have a necessity for guns than they do for horses. Of course, one might argue that nonetheless there is also an innate right to own horses. Even so, there is nothing in the Constitution to prohibit the government from banning such ownership under the right circumstances. Individuals, for instance, could be lawfully barred from owning horses if they were found to be cruel to animals. And there might be a lawful nationwide ban on equine ownership if horses became an endangered species, or were suddenly found to be a threat to the “general welfare” — carriers, for example, of a deadly plague. Firearms are carries of a deadly plague.

But aren’t there indeed basic, innate human rights that cannot be justly compromised by any legislation? Well, sure. The Founders of the Republic summarized them very nicely: “life, liberty and the pursuit of happiness”. That may sound like a short list, but it actually covers a great deal of territory. It includes, for instance, such basics as food, clothing, shelter and medicine. But do guns fall in that category? Perhaps for a limited number of individuals in a limited range of circumstances. But to declare that there is a “God-given” right for all citizens to be armed is a very big stretch indeed — particularly when the evidence indicates that guns do considerably more harm than good.

You certainly have an innate right to defend yourself from harm.  So how, you may ask, do you defend yourself without a gun?  We just as easily could turn the question around and ask how can you even consider guns a viable element of self-defense when they are statistically so ineffective and even, evidently, downright counterproductive. (As a person who once was mugged at gunpoint, I say with confidence that one reason I am alive today is that I wasn’t armed.) But the short answer is, you use your head instead of your trigger finger. It’s hard to be more specific than that, because techniques and strategies will vary by the individual. But in any case, it’s naive and foolhardy to assume that a right to self-defense means you should be armed. And it’s ill-informed to believe you have an innate right to be.