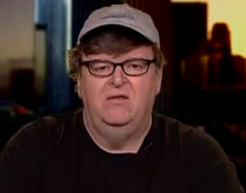 “The most hated man in America” is how Michael Moore describes himself in his new book Here Comes Trouble: Stories from My Life. This self-characterization is not an exaggeration. For a time at least, there was probably more hatred directed toward him -from “patriotic” Americans – than toward Osama bin Laden and Saddam Hussein combined. A good indication is that during the 2004 election season, someone pointed out to him that while there had been one film released that attacked Democratic presidential candidate John Kerry, there had been no fewer than six attacking him. The assault on his reputation is a superb illustration of just how successful a propaganda juggernaut can be.

The most intense period of hatred, to which he specifically alludes, is the few months following his 2003 speech accepting an Oscar for “Bowling With Columbine”.  Inviting his fellow nominees to join him onstage (they all accepted), he denounced George W. Bush’s “war” in Iraq. It was obviously a tense moment, because the usually eloquent and unflappable Moore slipped grammatically, saying “fictition” for “fiction” (he’d just used the word “fictitious”), sounding for the moment as linguistically inept as the politician he was referencing.

The reaction, as he recounts in the book, was immediate and WAAAAAY over the top. He arrived back home to find that loads of manure had been dumped in his driveway and signs posted warning him to leave the country. During the ensuing months, he was constantly subjected to threats, harassment and actual physical attacks.

Part of the explanation is that the Bush administration had done an excellent job of exploiting the 9-11 attack for political advantage, invoking it to justify everything from tax cuts for the wealthy to domestic drilling for oil. As Bush himself repeatedly reminded us, we were either with him or we were with the “terrists”. And a large portion of the American public, eager to be angry at someone, bought into it. Anyone who dared question the nation’s leader in even the smallest detail was likely to be branded as anti-American. (My, how times have changed.)

But that’s only part of the equation. Moore was a favorite tar baby of demagoguery even before the Oscar speech, and has continued to be so long after his vindication by the exposure of the Bush gang’s deceptions. As we’ve previously noted, the propaganda technique we call flag-waving requires right-wing extremists to condemn as unpatriotic anyone who does not support their positions. Moore certainly fills the bill, as he frequently criticizes Republicans and Randians. Apparently, he doesn’t even earn any grace points from the fact that he also often criticizes Democrats.

The official spin is that Michael Moore is himself an ideological extremist, a loose cannon, a venomous  polemicist – he has been called, for example, the “Ann Coulter of the Left.”  But nothing could be farther from the truth. Ann Coulter, and just about any other right-wing pundit you can name, revels in ad hominem smears and blanket demonizing of entire groups of fellow citizens – most notably Democrats and “liberals” (the latter often spat upon but seldom if ever defined). I challenge you to find a single example of Moore doing any of this. Go ahead, I’ll wait.

Okay, I’m tired of waiting. Get back to me if you find one.

Moore never even returns in kind the vicious assaults leveled at him. He formerly aspired to become a priest; and unlike many other Christians, he actually practices what Jesus preached – even those annoying little bits about, um, loving your enemies and turning the other cheek.

One of the most vituperative of Moore-bashing websites, moorewatch.com (now apparently defunct) was operated by a fellow who’d harbored an obsessive hatred of Moore for years. When he announced to his readers that the site might go under because he was overwhelmed by his wife’s medical bills, Moore – then working, appropriately enough on “Sicko” – sent him an anonymous donation of $12, 000 so he could go on exercising his First Amendment right to spout hatred. Which he did.

During the 2004 presidential campaign, USA Today took an interesting approach to balanced coverage by hiring Michael Moore to cover the Republican convention (where John McCain made a point of singling him out so the crowd could boo him) and Jonah Goldberg of the ever-entertaining National Review to cover the Democratic convention. (Some day I must tell you about my own amusing brush with Goldberg.)

Moore was up first, and anyone expecting him to indulge in juvenile name-calling against either the convention’s attendees or George W. Bush was sorely disappointed. In fact, he made a point of complimenting Bush as a person, praising him in particular for his apparent success as a parent. His disapproval, then as always, was based on one thing: the man had done a miserable job at the position to which he’d been appointed, and should be replaced. Nothing personal.

Then came Goldberg’s turn, and not surprisingly he painted Democrats with a broad brush as corrupt, incompetent and evil. And of course took an obligatory swipe at Moore.

Taking swipes at Michael Moore, indeed, has become a very profitable industry, and a folkloric image of him has been constructed as a hypocritical, anti-American, socialist, manipulative, grandstanding moron and/or mastermind. Oh yes, and there must always, always be a schoolyard reference to his girth.

In 2008, a group of Hollywood Republicans, all five of them, made a film called “An American Carol” that was intended to be an agitprop spoof of Michael Moore and his work. (Insert comment here about Republicans being habitually a few years behind the times.) The flick often featured such side-splitting humor as the main character, representing Moore, getting whacked in the face. Stop it, guys, you’re cracking me up. Even if its approach to comedy hadn’t been so puerile, it was doomed from the get-go because it was founded on the premise that “Michael Moore hates America” – which, I kid you not, was the actual title of another movie. When asked about his reaction to “An American Carol”, Moore just good-naturedly replied, “I hope it’s funny”.

In the 2005 book 100 People Who Are Screwing Up America, Bernard Goldberg (no relation to Jonah, astonishingly enough) lists 100 people (actually a lot more than that, since some of the people are actually groups of people, but what’s a little mathematical imprecision when you have an important statement to make) who, by challenging his beliefs, are destroying his country. Perhaps the most amusing inclusion is Eve Ensler, playwright of “The Vagina Monologues”, which uses the word “vagina” too much for Goldberg’s taste and by talking too much about people who have them, displays an anti-male, and therefore anti-American, bias. Guess who takes the honored spot of public enemy number one in his tome? If Goldberg hates Michael Moore, then Moore must hate America.

With all the propaganda directed at Moore, it’s natural to ask whether he himself is a propagandist by our preferred definition – i.e., whether he deliberately deceives in order to persuade. The short answer, Internet rumors notwithstanding, is no. But it’s a fair question, and we’ll take a more detailed look in the future. The point for now is that he sets a supreme example of civility in an age when it’s an uncommon commodity; and it would be hard to find a public figure having a greater discrepancy between media image and actual character.

(Posted, ironically enough, on Columbus Day – when Americans honor and glorify a greedy, ruthless, murderous conqueror who was also an incompetent navigator  who went to his grave never even realizing that he’d bumbled into a different continent.)