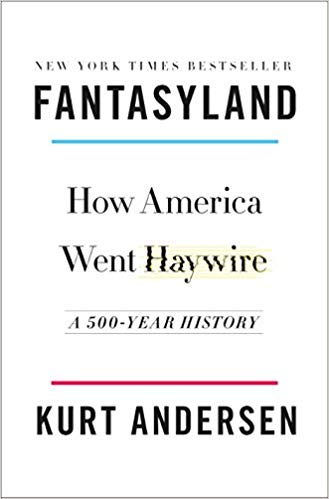 Many Americans felt totally blindsided by the turn of events in November 2016. Suddenly, it seemed that the human race had slipped through a wormhole and ended up in a dystopian dimension where the laws of reason no longer apply. Well, that sensation is half accurate. We are indeed living in a surreal dystopia. But our entry into it was not sudden. Nor was it particularly anomalous; it’s what America has been inexorably heading toward from the very beginning, as Kurt Andersen chronicles in his book Fantasyland: How America Went Haywire: a 500-Year History.

America, Andersen says, was explored and founded on fantasy.  Indeed, its roots in Fantasyland, according to his thesis, go all the way back at least to Martin Luther, who flashed his fantasy badge by rebelling against the official dogma of the Catholic Church. This, like so many other developments in Fantasyland, had its positive aspects. The church certainly was corrupt and imperious, and seriously needed fumigating. But Luther mostly just substituted one set of fantasies for another. And while he set an admirable example by challenging orthodoxy, he certainly didn’t qualify as a full-blown skeptic; and he also set a dubious example by establishing that you can get away with — and indeed found an enduring movement by — believing whatever you choose to believe. (Confederacy, anyone?)

Religion figures prominently in the self-delusion of those who have called America home. It’s well known that the early settlers were a pious sort who came to the New World looking for some sort of religious freedom or other. But what you may not be aware of is just how kooky their religious convictions were.  Some of them expected to find (along with a cartload of gold on every acre of land) the Garden Of Eden in Virginia. Not create a new Edenic paradise, mind you, but literally find the actual Eden as described in the Bible. In Virginia.

And that tradition of sacred wackiness has continued in a long unabated progression that includes Joseph Smith, snake handlers, speaking in tongues, faith healers, David Koresh, televangelists, and “intelligent design”. Not to mention Jim Jones, whose great legacy was bequeathing to us the quintessential metaphor for blind obedience to batty ideological fanaticism.

The pursuit of fantasy, as Andersen makes clear, is by no means an inherently negative activity. It has given us Hollywood, Disneyland, and imaginative, aesthetically pleasing architecture at shopping malls. But it’s a two-edged sword. People go to those shopping malls in the first place to immerse themselves in a culture of escapist consumerism. Disney is fun, but Andersen tells of people who are so addicted to it that they prefer the fake European landmarks at Epcot to the real thing in Europe. And many viewers of films and TV have heavily blurred the line between fantasy and reality — actors who portray TV doctors routinely receive mail from fans soliciting medical advice, and some TV viewers even believe a cop can actually shoot the gun out of a villain’s hand. Ultimately, this would lead to “reality” TV, and then to the “reality” TV “president”.

Fantasyland is not a political book, but it would not have been complete without some discussion of American politics and political diatribe. And as Andersen acknowledges, there is a grain of truth to the popular narrative that “both sides do it” — a fair number of liberals, for instance, are anti-vaxxers or 9-11 Truthers. But it is, far and away, hands down, by the slidiest of landslides, the conservatives and right-wingers who absolutely dominate the schizophrenic field. They have birtherism and “false flags” and the “deep state” and Benghazi cover-ups and Pizzagate and Climategate and massive voter fraud and a “border crisis” and drastically redefining “fake news”, and Fox “News” and on and on and on. Not to mention they have given us two show biz presidents who have tried to remake the universe to conform to their own self-indulgent psychotic visions.

Fantasyland is so thorough and wide-ranging that any faults one might find with it would border on pointless nit-picking.  One dark corner of Fantasyland Andersen shines the spotlight on is America’s obsession with firearms. (You can read an excerpt from this part of the book at Slate.) As he correctly states, the gun addiction is driven by a deranged John Wayne fantasy of “armed good guys stopping armed bad guys” — but in real life, the chances of this happening are quite slim. To bolster this point, he cites the Justice Department’s Crime Victimization Surveys indicating no more than about 50,000 to 60,000 such incidents per year. (If that sounds like a lot, bear in mind that guns are used to commit at least 400,000 crimes per year.)

But in fact, he is using a questionable set of figures — and thereby actually weakening his argument. Because, as we’ve discussed before, such estimates are mere guesses based on how often gun owners claim they’ve used their guns in self-defense. (The most popular such “statistic” is a whopping 2.5 million, which is, one might say, slightly incompatible with 50 to 60 thousand.) But the confirmed number of apparent DGUs is much, much lower still: no more than about 2000 per year. And many of those incidents are either bogus or highly suspect — i.e., their defensive nature is very much in doubt.

One might object that Andersen is a bit too hard on Oprah Winfrey and other pop culture gurus; after all, they certainly have been, in many cases, forces for good.  He’s also perhaps a bit hard on the hippie movement, in part for the same reason. Certainly, that phenomenon did encompass a certain element of fantasy; but there were (are?) many different kinds of hippies, and so trying to give them any kind of blanket characterization is problematic. Furthermore, one point about the hippie culture that many people miss (including, apparently, Mr. Andersen) is that it was never intended to be permanent.  In fact, some of its leaders even mounted a “funeral for the hippie” in the Haight-Ashbury during October of 1967. Just weeks after the much-vaunted Summer Of Love, which was intended largely as just a huge block party to celebrate the dedication to a fresh set of values.

Andersen, being human, is biased, and inevitably those biases show — which isn’t really a problem because he doesn’t let his convictions replace the facts. He definitely comes across as a secularist, which is fine; but perhaps he could have pointed out that, while it’s foolish to live one’s life on the assumption that there will be a life in the hereafter, there’s nothing wrong with allowing for that possibility. Similarly, he is correct to expose the absurdity of UFO mania — the rash of claimed UFO sightings and alien encounters. But he might have mentioned that the absurdity of such stories does not preclude the possibility that there are technologically advanced extraterrestrial civilizations. (Indeed, it has been mathematically demonstrated to be quite probable.)

But such objections are very minor, given the scope of his dissertation, which is quite substantial and convincing. Perhaps the book’s biggest shortcoming is something over which the author has no control: the lack of any solution, any ray of hope that we might somehow be able to escape Fantasyland. There’s a very simple explanation for this deficiency: so far as anyone knows, there is no solution or ray of hope. America is not just going through a phase. She is fulfilling her manifest destiny as the world’s largest nuthouse.

Leave a Reply to “Sky Hooks”; and a Book Worth Half Reading – The Propaganda Professor Cancel reply