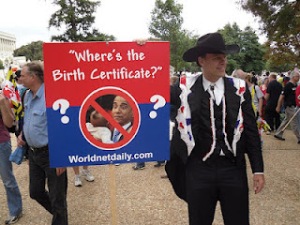 Like an interplanetary blob that keeps managing to resurrect itself for B-movie sequel after B-movie sequel no matter what the heroes do to squelch it, birtherism just will not die. Birthers absolutely live to hate President Obama; and unwilling or unable to challenge him cogently on the issues, they instead resort to ad hominem attacks and the malicious rumor mill:  he’s a “socialist” and/ or a Nazi who “pals around with terrorists” and “can’t speak without a teleprompter”; he’s the most secretive and power-mad and corrupt president in history; and furthermore, he ain’t even Amurrcan. (But of course it has nothing to do with racism, so don’t you even suggest such a thing.) And proving them wrong only encourages them.

They have indeed been proven wrong, soundly and repeatedly. As we previously observed, the president posted an official copy of his birth certificate on the White House website; and it holds up to the inevitable charges that it’s a forgery. For what it’s worth, I even know of a medical professional who was acquainted with the doctor who delivered Obama. And it didn’t happen in Kenya.

But what do facts matter when you have an ideology to push and an Obama to hate? In several states, certain fringe elements (to put it as kindly as possible) have even filed lawsuits to try to establish, despite the insurmountable proof, that the president is not a U.S. citizen. Some states (notably Arizona, which seems to be trying to corner the market on kooky legislation) are pondering “birther bills” that would require the President to prove his citizenship (again!) before his name can be placed on the ballot there.  And a few days ago, the following headline began to spread like an oil slick across the Internet:

Now you might think that a headline like that would raise an army of red flags among even the most acute sufferers from Obama Derangement Syndrome. You’d be mistaken. It appears that none of them questioned it. Instead, they just passed it on as gospel. Indeed, this non-story quickly attained what I call Search Engine Overload Bias– meaning that the Internet became so saturated with it that any story refuting it (if in fact anyone connected to the administration bothered to respond to it at all) was pushed so far down the ranking of web pages as to be invisible. (Likewise, it’s all but impossible to dig up an honest appraisal of measures regulating firearms, because the gun lobby has co-opted the term “gun control” and transformed it into a Satanic invective, and has absolutely deluged the Internet with claims that it’s ineffective and downright counterproductive. But that’s another story.)

Try doing a search for “Obama Lawyer Admits Forgery” and see how many hits you get, all parroting a single source: that hallowed bastion of impeccable journalism,   The Tea Party Tribune, which was in turn quoting The Daily Pen. Yep, this earth-shattering “news” story is brought to you by the same crowd that previously proclaimed Obama had hiked their taxes and outlawed fishing; that “Obamacare” is “socialized medicine” that establishes “death panels”; that the United Nations owns the National Parks; that ACORN stole the 2008 election; and that global warming is a “scam”.

Extraordinary claims require extraordinary proof. And it would be most extraordinary indeed if a president admitted that an official document posted on the White House website was fraudulent. So where is the proof from these folks who keep saying “show me the proof”? Well, um er… It turns out that while The Daily Pen is the original source of this story, its own source – like the source of so many Obama rumors – was someone’s ass.

The article does not include a quotation, even a fabricated one, from Obama legal representative Alexandra Hill admitting that the birth certificate is a forgery, and for a very good reason: it isn’t, and she didn’t. But it does contain, like any yarn from a spinner of tall tales, embellishment upon embellishment. For instance, there’s this:

Hill went on to contort reasoning by implying that Obama needs only invoke his political popularity, not legal qualifications, in order to be a candidate.

It certainly would “contort reasoning” to suggest that she said any such thing. But nothing is more contorted than saying that

arguments from an Obama eligibility lawyer during a recent New Jersey ballot challenge hearing reveals the image was not only a fabrication, but that it was likely part of a contrived plot by counterfeiters to endow Obama with mere political support while simultaneously making the image intentionally appear absurd and, therefore, invalid as evidence toward proving Obama’s ineligibility in a court of law.

As evidence that the certificate is a not only a forgery but a deliberately absurd forgery, the Pen reproduces an enlarged section of it with a couple of “suspicious” details highlighted:

First, the word “the” appears to be misspelled, and heaven knows there were never any typos in those days of manual typewriters. Second, the first letter in the registrar’s signature includes a couple of erratic marks which are clearly intended to depict … are you ready for this… a SMILEY FACE! I’m not making this up. Never mind that smiley faces are always very distinct frontal images, and these stray marks would make a very indistinct smiley profile. Clearly, it’s proof the whole document is a sham.

In a perfect world, I might be asking whether anyone really believed The Daily Pen’s story. Instead, I find myself asking -rhetorically at least -whether there’s anyone who didn’t believe it. But I also find myself asking just who benefits from a story like this. And as I see it, there’s only one person who might even conceivably benefit: President Obama himself.

The guy surely has his shortcomings – he’s only human. (He also has his strengths, which don’t receive nearly the attention they deserve.) Wouldn’t it do the public a better service to focus on evaluating those actual weaknesses, thus pressuring him to address them? But legitimate criticism of his performance on the job tends to get brushed aside in the frenzy over the tin hat stuff, such as this obsession with his birth certificate. If he really does have even a fraction of the evil about him that the Obama haters claim, he must be howling with fiendish delight right about now.