The Myth of “Liberal Fascism” 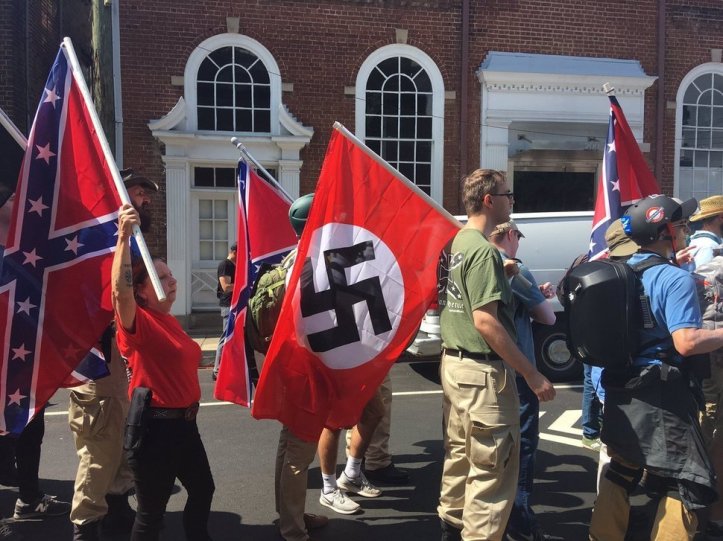 Of the many revisionist narratives that right-wing polemicists have been pushing in recent days, perhaps the brassiest of all is that fascism is a movement of leftist/ liberal origin. This claim isn’t just wrong; it’s arguing a case that is literally the direct opposite of reality. Liberalism, however misguided it may be at times, is at its heart about… well, heart — which is to say about producing benefit for as many people as possible. Fascism, on the other hand, is an ideology of power that, deliberately or with callous indifference, inflicts harm on those who are not in power. The two are like oil and water.

But the fact that “liberal fascism” is an oxymoron has not prevented it from taking root among the True Believers. Two bestselling books have emerged from the right-wing fever swamps that have reinforced and popularized this bizarre myth: Liberal Fascism by Jonah Goldberg, and The Big Lie: Exposing the Nazi Roots of the American Left by Dinesh D’Souza. (Not just fascist, mind you, but Nazi.) Both of these esteemed authors have been frequent contributors to the excruciatingly vapid National Review, which we’ve covered in a three-part series. Both are astoundingly inept sophists who sometimes (particularly in D’Souza’s case) border on sheer lunacy.  (D’Souza, by the way, is also a convicted criminal.) But they somehow have managed to convince a large number of people that they are intellectuals who have something of substance to offer.

Like many others who advance this myth, they essentially spend a good deal of time playing a game of Six Degrees Of Separation: FDR had “concentration camps” for Japanese-Americans, and Hitler had concentration camps for Jews — and since FDR was a Democrat and Democrats tend to be more liberal than Republicans, that means that liberals are like Hitler (never mind that FDR didn’t torture or kill his internees, nor were they even subjected to the kind of inhumane conditions as current refugees at the border). Some left-leaning folks were interested in eugenics, and the Nazis were interested in eugenics; therefore, liberals are Nazis (never mind that the purposes and applications were quite different); the Nazis regulated smoking, and liberals regulate smoking; therefore, liberals are Nazis (you’re supposed to forget about the conservatives who also support tobacco regulation); Hitler was a vegetarian and some liberals are vegetarians (ignore the many liberals who are not vegetarians and the conservatives who are).

Dinesh D’Souza (why do his ramblings remind one of Dustin Hoffman in Rain Man?) points to U.S. oppression and genocide against Native Americans and proclaims that it served as a role model for Nazi persecution of Jews. Aside from the dubiousness of such a thesis, the more interesting thing is that only a short time before he proposed it, D’Souza was denying that genocide against Natives occurred at all.

And just why is that shameful spot on America’s timeline supposed to be relevant to liberals? Well, because a large part of it was performed under the leadership of Andrew Jackson, silly; and he was a Democrat, don’t you know. D’Souza is picking up the drumbeat of a very popular right-wing narrative these days: pointing to the shady history of the old Democratic Party without mentioning (and indeed, often even denying) its transformation in the Sixties. He even issued a challenge on Twitter about this and Princeton historian Kevin Kruse gave him more than he bargained for. (This dovetails with another informative Twitter thread Kruse wrote on this topic.)

One talking point these people like to bring up is that Mussolini was a socialist. Yes, he was — to begin with. But he later abandoned the socialist party and started the Italian fascist party, which was vehemently opposed to what he formerly had stood for. He challenged the socialists in elections, tried to overthrow them after they were in power, and even encouraged violence against them.

Then of course there is the origin of the word Nazi: it’s an abbreviation of Nationalsozialistische Deutsche Arbeiterpartei, or National Socialist German Workers Party. If the Nazis applied the word socialist to themselves, that settles it, eh? So you’re telling me that a party that engaged in massive genocide and massive dishonest propaganda couldn’t possibly be guilty of deceptive advertising? The Nazis simply heisted a term they thought they could get some mileage out of — not unlike today’s right-wingers co-opting “fake news” and “right side of history”. It’s reported that the Soviet Union prohibited the use of the word Nazi because its disingenuous reference to socialism defamed real socialism. Hitler made it clear by his comments and even more so by his actions that those on the left were The Enemy. Indeed, socialists and communists were the first on the guest list at Nazi concentration camps.

And another thing they bring up — and indeed the apparent inspiration for the title of Goldberg’s book — is the use of the phrase “liberal fascism” in a speech by British science fiction novelist and socialist philosopher H. G. Wells in which he called for a sort of “liberal fascism”. But this does not mean, as some people would insist on inferring, that he considered liberalism actually to be fascist, or vice versa. On the contrary, if he did, why would there be a need to use both words together? He was, instead, deliberately conjoining two words that ordinarily do not keep company, like “compassionate conservative”, in a little exercise of poetic license. He was suggesting that socialism learn from the efficiency and expediency of fascism, not that it embrace the fascist agenda. If you want to know how Wells really felt about fascism, read his 1924 essay, “The Spirit of Fascism: Is There Any Good in It at All?” His response to that question is an unequivocal negative.

In short, these inane revisionist tracts lean heavily on cherry picking, misdirection and disinformation. We’re not going to waste a lot of time going into a detailed analysis of them here, since so many other worthy commentators have already done so. If you’re curious about the two books mentioned, and yet you’re not quite masochistic enough to actually read them in their entirety, it’s easy to find adequate excerpts, summaries and debunkings. There is an excellent analysis of D’Souza’s embarrassing volume by the always-astute Nathan J. Robinson at Current Affairs, and other worthwhile articles about D’Souza in general that include discussions of this particular book at The New York Times, Lit Hub ,  U.S. News  and The Atlantic among many other places. The History News Network ran an entire series of articles, written by actual scholars of the topic, about Goldberg’s contribution to the canon. They also published Goldberg’s response, and then their responses to his response.

His response, by the way, was exactly what you have come to expect from members of the right-wing punditocracy: petulant, accusatory and intellectually dishonest. He declared that the historians critiquing his brilliant words were engaging in personal attacks. They weren’t. He cited a saying to the effect that “if you’re getting flak, you must be over the target”; evidently he believes that if his claims had actually been wrong, nobody would have bothered with correcting them. This jejune behavior is quite in line with the tone of the book; he even states in the intro that his whole purpose in writing it was to get even with liberals who have (rather more accurately) linked fascism with right-wing extremism. Thus, he penned a defense saying basically, “No, you’re really the fascists; it takes one to know one. And by the way, your mother wears army boots”. Jonah and most of his fellow winger pundits are card-carrying members of the “neener neener, suck my wiener” school of discourse.

The best thing that can be said in defense of the revisionists is that fascism did draw, in some small measure, upon certain left-leaning movements of the past.  But it also drew upon many other influences, including Christianity; does this make fascism a Christian movement? At Arc Digital, in offering a repudiation of Goldberg that nonetheless graciously grants him a bit of a chance to save some face,  Joshua Tait observes:

Historically, too, fascism was of the right. Its supporters were from social groups that supported right-wing parties. Its allies, domestically and internationally, were rightists. Fascists rose to power fighting leftists and abetted by conservative allies. Mussolini called his fascist journal Hierarchy. The Italian manifesto The Doctrine of Fascism proclaimed, “we are free to believe that this is the century of authority, a century tending to the ‘right,’ a fascist century.”

Hierarchy, by the way, is a cornerstone of right-wing ideology in general, and particularly of fascism.

And in the feature on Fascism at Encyclopedia Britannica (an article written, unlike the two books in question, by an actual historian) , there is this succinct passage:

Many fascist ideas derived from the reactionary backlash to the progressive revolutions of 1789, 1830, 1848, and 1871 and to the secular liberalism and social radicalism that accompanied these upheavals.

A backlash to progressive revolutions and secular liberalism. Not an outgrowth of them. This article also contains a listing and description of the defining characteristics of fascism. These include:

This is only a partial roster,  and the article contains more details about these traits, and links to documentation. But you can see just by glancing at the list above that the idea of “liberal fascism” doesn’t hold water. Does it make any sense at all for a liberal movement to oppose liberal values while embracing conservative economics and corporatism?

In the U.S., as in Nazi Germany, fascism is closely linked with white nationalism, which is definitely a right-wing earmark. But the right-wing revisionists have been trying desperately to shift that burden (as in pretending that the racist Democrats of bygone days were liberals). Accordingly, they’ve wrung a great deal of mileage out of the fact that Hillary Clinton was on friendly terms with the late Senator Robert Byrd, who was a member of the KKK many, many years ago. They have even circulated a fake photo of Sen. Byrd, in his silver-maned years, posing in his KKK regalia — it apparently doesn’t occur to them, or they just don’t care, that the photo is doctored. In any case, they make the argument that this proves Hillary is a racist, and therefore that all Democrats are, and therefore all liberals are.

Robert Byrd joined the KKK in the Forties as a very young man. He renounced it a few years later. By 1970, his views on race had totally evolved. Long before the end of his career, he was on good terms with, and winning accolades from, the NAACP.  But somehow, Hillary Clinton’s association with one man who was a member of the KKK many decades ago is supposed to matter more than the self-proclaimed Nazis and KKK members demonstrating in the streets right now — virtually all of whom vote Republican and are enthusiastic supporters of the Forty-Fifth White House Occupant.

It’s hard not to draw the conclusion that the desperate attempts by the revisionists to draw some long, tenuous threads of history between fascism and liberalism are a decoy to divert attention away from the cozy relationship between conservatives and fascists in the present.